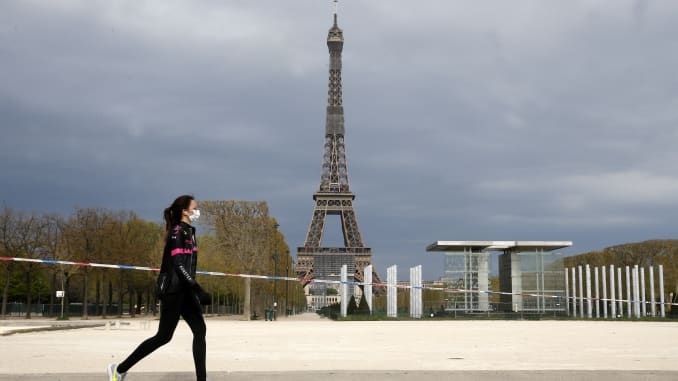 France is in recession and undergoing its sharpest slowdown since the Second World War, shrinking by 6 per cent in the first quarter of 2020 due to the economic impact of the coronavirus pandemic.

Figures from the Bank of France revealed that the negative growth came at the end of the quarter, when strict containment measures were introduced nationwide to halt the spread of the Covid-19 disease.

France went into lockdown on 17 March, prompting economic activity to fall by 32 per cent over the following two weeks.

The central bank forecasts that for every two weeks the country continues to be in lockdown, the economy will shrink by a further 1.5 per cent. The current end date for the lockdown is 15 April but it is widely expected to be extended.

Among the industries heavily impacted by the lockdown are construction, tourism and transport, some of which were already faltering at the end of last year.

It is the second consecutive quarter that France’s economy has shrunk, following a 0.1 per cent decrease at the end of 2019, meaning it meets the official definition for a recession.

There have been more than 100,000 confirmed cases of coronavirus in France, making it the fourth worst affected country behind the US, Spain and Italy.

The deadly virus has resulted in 10,328 deaths in the country – a figure that jumped by more than 1,400 on Monday.

The novel coronavirus has infected close to 1.5 million people around the world, according to official figures, though the number is expected to be significantly higher due to a lack of testing.