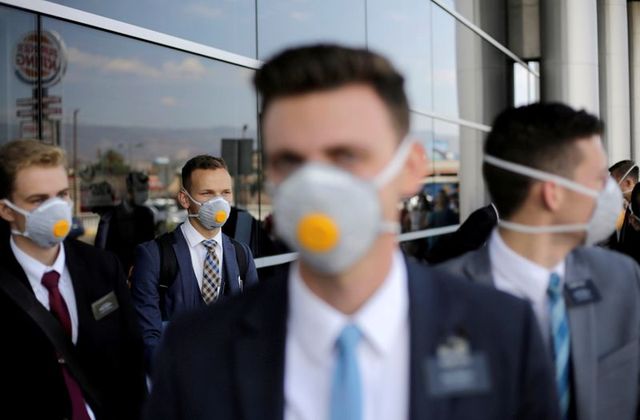 The number of confirmed infections of the novel coronavirus was reported to have exceeded 1.47 million globally and the death toll crossed 87,700, according to a Reuters tally as of 0200 GMT.

- For an interactive graphic tracking the global spread, open tmsnrt.rs/3aIRuz7 in an external browser.

- U.S.-focused tracker with state-by-state and county map, open tmsnrt.rs/2w7hX9T in an external browser.

- Europe’s governments need to support each other to adopt the best policies, European Central Bank President Christine Lagarde said in a letter to an Italian daily.

- European Union governments piled pressure on the Netherlands to unblock half-a-trillion euros of economic support ahead of a meeting of finance ministers, with Italy saying the very future of the EU was at stake.

- Italy may start lifting some restrictions by the end of April provided the slowing trend continues, its prime minister told the BBC on Thursday, but the easing can only be gradual.

- Hungary registered more than 100 infections in an elderly people’s home in Budapest.

- Spain’s number of daily coronavirus deaths slowed on Thursday after two days of increases as 683 people succumbed in 24 hours, taking the total to 15,238, the health ministry said.

- British Prime Minister Boris Johnson spent a third night in intensive care but is improving as his government prepares to review its most stringent shut down in the peacetime history.

- Efforts to push a further $250 billion of aid for small businesses through the U.S. Congress stalled as top Democrats said they would back the measure only if it was coupled with a similar amount for hospitals and local governments.

- Some coronavirus patients who would have been admitted into the emergency department at a New York hospital are being sent home with oxygen-monitoring devices as the city’s medical system struggles to reserve resources.

- The United States will seize exports of key protective medical gear until it determines whether they should be kept in the country, federal agencies announced on Wednesday.

- Ecuador’s president called for an investigation into how local authorities handled the bodies of coronavirus victims in Guayaquil, the epicenter of the country’s outbreak.

- Mexico registered 396 new cases, bringing the country’s total to 3,181 with 174 deaths. Its deputy health minister said Mexico might have 26,500 people infected with the virus.

- Peru extended its state of emergency for two more weeks to April 26.

- Honduras will extend its national curfew to April 19.

- Chinese doctors at a key coronavirus hospital in Wuhan said they have been using HIV drug Kaletra since January and believe it is beneficial, despite a previous study that said it was ineffective.

- Australian police said they have taken the “black box” of a cruise ship which disembarked hundreds of infected passengers in Sydney, as part of a homicide investigation into the country’s deadliest infection source.

- Indian and Pakistani troops in Kashmir are engaged in their most frequent cross-border fighting of at least two years, official data shows, even as they battle surging outbreaks.

- A lockdown kept the streets of Jerusalem and other Israeli cities nearly empty on the Jewish Passover holiday, which typically draws crowds of people.

- Political and physical divisions in the West Bank and Gaza have induced two very different responses, with a strict lockdown in the first and crowds milling about freely in the second.

- Ethiopia and Liberia declared states of emergency, a day after cases on the continent surged past 10,000.

- A South African public sector union withdrew a court case against the government over shortages of protective gear for frontline health workers.

- Global shares rose on Thursday on hopes the pandemic was nearing a peak and expectations of more economic stimulus, while expectations of a deal to cut oil production bolstered crude prices.

- Investment funds should not face enforcement action by national regulators for failing to meet reporting deadlines during the crisis, the European Union’s markets watchdog said.

- A decision by India’s supreme court to make testing for coronavirus free places an unfair financial burden on medical firms and could see a reduction in testing, said business leaders and health experts.

- Britain’s economy was almost stagnant in the three months to February, before the coronavirus crisis escalated and pushed the country into what is likely to be a historic recession, official data showed on Thursday.

- Ireland’s unemployment rate more than trebled to 16.5% at the end of March, the state’s statistics office said on Thursday, ahead of a likely further surge this month.

- Denmark’s economy could shrink by up to 6% this year and the country faces the “darkest chapter in its economic history”, its finance minister said.

- Switzerland’s government will look at temporarily changing its bankruptcy laws to protect companies hit by cash-flow problems and mounting debts during the crisis.

- Mexico will apply looser liquidity rules on banks to help them weather the outbreak, the central bank said.

- Dubai told all government agencies to slash spending and freeze hiring until further notice, according to an official document seen by Reuters.

- The fallout from the coronavirus could push around half a billion people into poverty, Oxfam said on Thursday.