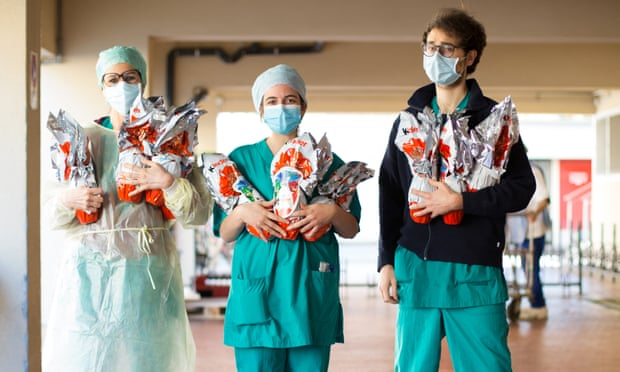 France and the Netherlands have openly clashed over the meaning of a messy compromise struck by finance ministers which has unlocked a €500bn (£438bn) pandemic rescue package for European economies but left major issues unresolved.

Hours after a breakthrough was secured late on Thursday evening to allow immediate support for businesses and healthcare systems, it became clear on Friday that there remained bitter divisions within the EU over the longer-term task of rebuilding the European economy.

The finance ministers have agreed to make available to countries hardest hit by the coronavirus pandemic some €240bn of credit lines via the European stability mechanism, a bailout fund for struggling member states.

There will be no conditions attached where the spending is related to the immediate crisis. But normal rules on the need for balanced budgets will apply where the cash is spent on the wider economy.

On the toxic issue of the so-called coronabonds, under which the EU member states would borrow on the international financial markets on the same terms and share liability, the agreed text only referred to governments working on “innovative financial instruments, consistent with EU treaties” to create a rescue fund.

France’s finance minister, Bruno le Maire, insisted on Friday that this would ultimately equate to the joint issuance of debt, despite the opposition of the Netherlands, Austria, Finland and Germany.

Le Maire said: “I have a firm conviction that the fund will see the light of day and there will be debt raised jointly in a form that remains to be determined.

“It means what it means. The only instrument that does not yet exist in European financing is joint debt.”

Wopke Hoekstra, the Dutch finance minister, said he was “very satisfied” with the outcome after 16 hours of talks, adding of coronabonds that “there won’t be any”. He told Dutch TV stations: “Sometimes you have to put your foot down.”

The deal will now be put to the leaders of the 27 member states, with little apparent room for compromise on the longer-term economic response to the coronavirus. For the Italian government, the pandemic has become a test of the strength of EU solidarity.

Professor Alberto Alemanno, from the HEC Paris Business School, said: “We can expect national leaders to offer very different interrogations of the agreement. Several major issues remain open and need to be hammered down, notably the rescue fund’s sourcing.”

The entire package included agreement on boosting the lending capacity of the European Investment Bank and a new €100bn scheme proposed by the European commission to keep funding employee salaries if they are put on reduced hours. All of the measures will need to be signed off by 27 heads of state and government.

Charles Michel, the former prime minister of Belgium, who is now president of the European council, the EU decision-making body comprised of heads of member states, said he would hold an e-summit with leaders on 23 April.

He said: “The agreement of the Eurogroup is a significant breakthrough. More than half a trillion euros are now available to shield European Union countries, workers and businesses. With this unparalleled package, we shoulder the burden of the crisis together. This compromise is aimed at quick targeted relief... It is time to lay the ground for a robust economic recovery.”