France to remain in strict lockdown for another month 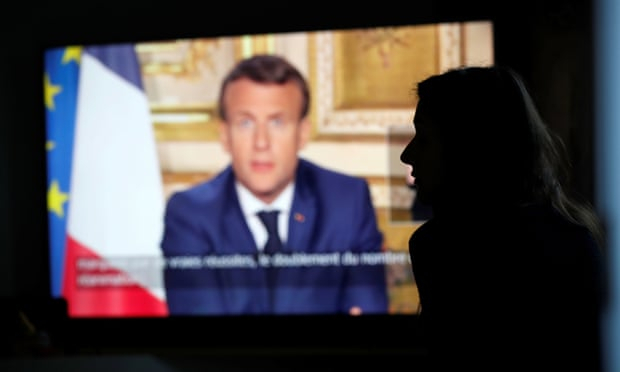 France’s president, Emmanuel Macron, has announced that the country will remain in coronavirus lockdown for another month, the Guardian reports.

In a national address on Monday evening, he said that only by respecting the confinement rules would the battle against Covid-19 be won.

Macron said France would start returning to normal life on 11 May, if citizens were “civic, responsible and respected the rules” – and if the number of cases of coronavirus continued to drop.

“We have to continue our efforts; the more the rules are respected the more lives will be saved. That is why I am announcing the strict lockdown will continue until Monday 11 May.”

“I appreciate the effort I am asking of you,” he said, adding: “There is new hope but nothing is won at the moment … the epidemic is not under control.”

It was Macron’s fourth televised address since the beginning of the coronavirus crisis and expectations were high, not just that he would make concrete announcements but that he would give some direction and reassurance.

Hospital admissions and death rates appear to have levelled off – though as Jérôme Salomon, the head of France’s health authority, has repeated, they remain at a “high level” – and the French were keen to know if and when the four-week lockdown restrictions may be eased.

In a 30-minute speech marked by a tone of humility, Macron gave an explanation, a response and a calendar for the next few weeks.

He admitted several times that there had been failings in dealing with the pandemic, particularly with the lack of masks and equipment, but promised that by 11 May there would be enough tests for “the elderly, health workers and the most vulnerable” and masks for everyone.

“Were we prepared? No. Clearly not enough. There were failings, there was a lack of material,” he said.

Macron added that the coming four weeks would be used to obtain more tests, masks and equipment, and organise financial aid not only for businesses but for those families in a precarious situation.

“These are difficult days and we are now feeling afraid and anxious for our parents and ourselves,” Macron said.

From 11 May, creches, schools, colleges and lycées will be “progressively opened” as a priority, he said.

“Many children are missing out of school and there is an inequality in that there are those who don’t have access to the internet and can’t be helped by their parents.”

While schools will open from 11 May, Macrons said restaurants, cafes, hotels, museums and cultural sites must stay closed and large festivals and events may only be allowed after mid-July.

Macron made reference to EU solidarity and the need to support African countries, including the possibility of cancelling their debt.

He said France’s borders with non-EU countries would remain closed. This is not thought to include the UK, as Britain is still in the Brexit transition period.

He concluded: “We have to reinvent ourselves, and me first of all … We are vulnerable. When can we hope for an end to this? I understand you have many questions and I would like to answer all of them. But I say in all humility, we don’t have definitive answers today.

“We will share with you what we know and what we don’t know, we will come out of this, but we still have several months of living with this virus.”

Macron added: “Take care of yourselves and each other and we will get through this.”