One year after Notre Dame fire, officials struggle to keep restoration on track 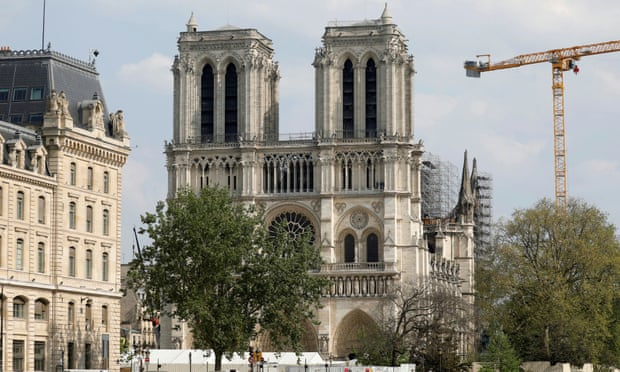 The army general in charge of rebuilding Notre Dame has said it is still possible for the cathedral ravaged by fire exactly one year ago on Wednesday to reopen in 2024 as pledged by Emmanuel Macron, if everyone “rolls up their sleeves”, the Guardian reports.

Jean-Louis Georgelin insisted unexpected delays in work to restore the 13th-century cathedral to its previous glory – including the coronavirus lockdown – need not derail the five-year deadline.

“If everyone rolls up their sleeves and the work is well planned, it is conceivable that returning the cathedral to a place of worship within five years will not be an impossible feat,” he said.

The fire was discovered at 6.43pm local time on 15 April 2019, at the base of a 93-metre-high (305 ft) wood and lead spire added in 1859 by the architect Eugène Viollet-le-Duc. The flames quickly spread to the cathedral’s ribbed roof, made up of hundreds of centuries-old oak beams known as la forêt (the forest).

As it spread, horrified Parisians turned out to watch as flames roared from the edifice, lighting up the night sky. Just before 8pm, the spire collapsed onto part of the cathedral’s vaulted transept.

The question of what do with the spire, a later addition, has raged since the days after the fire. Georgelin warned that arguments over whether it should be reconstructed as before or reflect a “contemporary gesture”, as Macron suggested, risked slowing things down.

“We have to be left to get on with the work and not caught up in the controversies,” Georgelin told L’Express magazine. “The quicker the decision is made about the spire, the quicker we will be able to really concentrate on the real reconstruction. It’s important that the objectives are set.”

About 500 firefighters struggled for 15 hours to prevent the fire spreading from the roof to the two belfry towers housing the cathedral bells. If the tower’s wooden frames had caught fire it could have sent the bells – including the largest Emmanuel bell weighing 13 tonnes – crashing down and collapsed the entire structure.

The fire was finally put out at 9.30am the following day. Two-thirds of the roof was destroyed, la forêt was gone, part of the vaulted ceiling had collapsed and up to 400 tonnes of lead from the roof and spire had been reduced to dust, part of it dispersed to the wind – but Notre Dame was still standing.

Macron immediately promised the shocked nation that the cathedral would be reborn in five years. “We will rebuild this cathedral. Together. It’s part of our French destiny. I promise to do this,” he said.

Since then, the 40-strong public committee overseeing the restoration headed by Georgelin has faced a number of challenges. Work was halted last summer until lead contamination could be removed, then again in the autumn when Paris was hit by winds of up to 40km/h (25mph).

Specialist artisan builders, known as compagnons drawn from all over France to take part in the rebuilding operation, were sent home when France went into strict Covid-19 lockdown on 17 March.

The operation to remove the 40,000 tubes of damaged scaffolding that were around the spire at the time of the fire and collapsed with it, described by the committee as “complex and spectacular” and expected to take several months, was to have begun in March but was halted by the lockdown.

Georgelin said he was looking at ways for the work to partially restart. Although the building is still officially declared “at peril”, the general said monitoring equipment attached to different parts of the edifice showed it had not moved in the last year.

As for the three honey bee colonies on the roof of the sacristy, that almost miraculously escaped the flames and firefighting operation, their keeper Sibyle Moulin, said she visited them a week ago and the 30-45,000 bees were getting on with their cycle and “completely unbothered”.

Spring is the time the queens mate and begin producing eggs to boost the colonies’ numbers and the worker bees are busy finding food, she said.

“Unfortunately, it was raining when I visited, but they all seem well. It’s the busiest time of the year for them,” Moulin said.