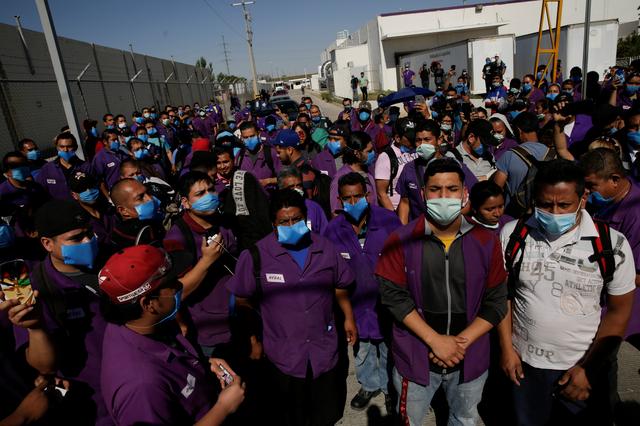 Protests have erupted outside factories in the Mexican border city of Ciudad Juarez in recent days after the deaths of several workers, including some employed by U.S. companies, from what the protesters said was the coronavirus, Reuters reported.

So far, 82 people have tested positive for the new coronavirus in the city that lies across the border from El Paso, Texas, local authorities said on Thursday. A total of 19 have died, the city health department said.

Several workers for Lear Corporation, a Michigan-based car seat maker, have died from respiratory illnesses, the company said in a statement to Reuters.

Honeywell International Inc on Thursday told Reuters a worker at one of its plants in the city had died after being sent home to self-quarantine and receive medical attention.

The deaths and the protests about ongoing production at border factories follow outbreaks of the virus at meat-packing plants in the United States that have raised concerns over working conditions during the epidemic.

Lockdowns that aim to stop the spread of the coronavirus are disrupting supply chains in the $1.2 trillion North America Free Trade Agreement region, with growing friction between governments and companies about which industries should continue to operate.

On Thursday, dozens protested outside the Honeywell site where the employee who died had worked, demanding its temporary closure, following similar rallies outside other U.S. and Mexican plants in the city.

“We want them to respect the quarantine,” said Mario Cesar Gonzalez, who said the Honeywell Ademco factory made smoke alarms.

“The manager said that we are essential workers. I don’t think an alarm is essential.”

Honeywell said the factory makes controls for heating, ventilation and air conditioning for critical infrastructures such as hospitals and laboratories.

In a statement to Reuters the company said it was “deeply saddened” to learn that one of its workers had died.

Honeywelll said authorities had not confirmed if the employee died from COVID-19, the illness caused by the coronavirus, but that it had closed the site, which the employee had worked at, for 48 hours to sanitize the area.

The company did not say when the death happened but said the worker had not been on site since April 2.

Lear said it had ceased all employee-related activities by April 1 in Ciudad Juarez.

“We are saddened that several employees at our Juarez City operations, who were receiving medical treatment at the same local government social security hospital in Juarez, have passed away, due to complications of respiratory illness,” the company said in the statement.

The Lear shutdown appeared to be in line with the Mexican government’s declaration of a health emergency on March 30, requiring companies to cease operations if their activities are deemed non-essential.

On Wednesday, dozens of other workers protested outside an assembly factory run by Regal Beloir, a Wisconsin-based manufacturer that produces electric motors for household appliances. They demanded the closure of that plant after the alleged death of one of their coworkers.

“A colleague already died last night. He had been working here. There are infected workers and we are not being told,” said one person who identified himself as a Regal employee at the protest but declined to give his name for fear of retribution.

Reuters was not able to confirm a death of a Regal worker. The company did not immediately respond to a request for comment.

The Mexican government is investigating whether some “non-essential” companies continue to operate. Refusing to follow the rules could constitute the crime of damage to health and could cost lives, Deputy Health Minister Hugo Lopez-Gatell said on Wednesday.

From April 3 until Tuesday, 15% of companies with non-essential activities had refused to stop work, Lopez-Gatell said.