Coronavirus: Deaths at 20-year high but peak may be over 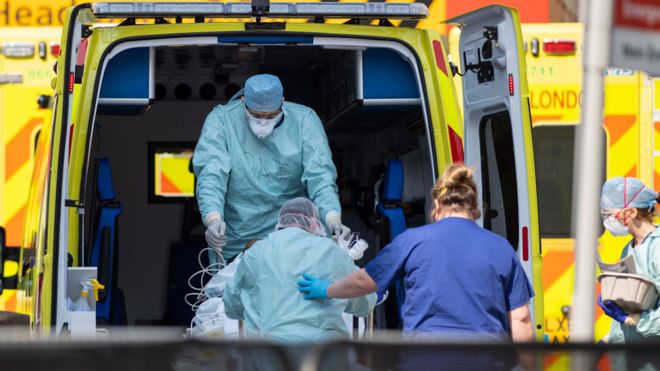 Deaths in England and Wales have nearly doubled above what would be expected, hitting a 20-year high.

The Office for National Statistics said there were 18,500 deaths in the week up to 10 April - about 8,000 more than is normal at this time of year.

A third were linked to coronavirus, but deaths from other causes also increased, suggesting the lockdown may be having an indirect impact on health.

But experts believe this period could well be when virus deaths peaked.

They point to a separate analysis by NHS England which showed since 8 April the number of deaths in hospitals have been falling when you look at the date of death.

The daily figures presented by government just show when hospital deaths are announced - there is often a delay in recording and reporting which masks when a drop in deaths starts happening.

On Tuesday 823 new deaths were announced, but most of these happened in the previous days and weeks. Some even date back to March.

Prof Sir David Spiegelhalter, of the University of Cambridge, said the NHS England figures suggested we were past the peak and in a "steadily" albeit slowly improving position.

But he added: "Judging from the experience in Italy, this could be a lengthy process."

Prof Carl Heneghan, from the University of Oxford, said he agreed, saying London, which saw rapid increases earlier than the rest of country, peaked even earlier, suggesting the steps taken before full lockdown had an impact.

But England's deputy medical officer, Prof Jonathan Van Tam, said: "We are not out of danger yet. We must keep pushing on this."