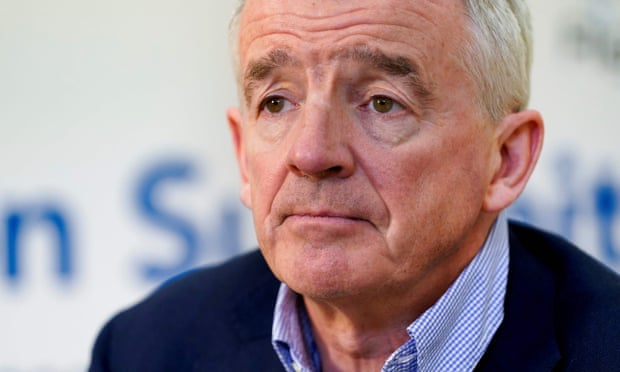 Ryanair planes won’t return to the skies if the airline is forced to leave the middle seat empty to comply with “idiotic” in-flight social distancing rules, its chief executive, Michael O’Leary, has said.

The boss of the no-frills carrier, which has thrived by packing its flights as full as possible with passengers lured by low prices, has previously said that blocking out the space in between aisle seats is “nonsense” that would have no beneficial effect.

He doubled down on the comments on Wednesday, saying that if governments insisted on social distancing measures, then Ryanair’s business model would be in tatters and the carrier would not fly.

O’Leary said that Ryanair had already told the Irish government that if it imposes the restriction, then “either the government pays for the middle seat or we won’t fly”.

The Dublin-based carrier’s business model relies on flying as frequently as possible, stripping out costs and running an extremely high “load factor”, the aviation industry term for how full planes are.

“Even if you do that, the middle seat doesn’t deliver any social distancing, so it’s kind of an idiotic idea that doesn’t achieve anything anyway,” he added, in an interview with the Financial Times.

The global airline industry’s trade body, Iata, has predicted huge ramifications for airlines as a result of Covid-19, with lost revenues this year set to hit $314bn (£255bn), the Guardian reports.

Iata said earlier this week that any rules designed to minimise contagion in the skies would temporarily put an end to the cheap air travel model pioneered by Ryanair, forcing carriers to raise prices by 50% or go bust.

Ryanair’s no-frills rival easyJet has said it expects socially distanced flights to be possible in the short term, given that demand for air travel is likely to be subdued in any case, even after lockdown restrictions ease off.

O’Leary said European airlines should instead take their cue from Asia and impose different safety measures, such as forcing passengers to wear masks or checking their temperature at the airport.

Ryanair flew more than 152 million people last year, putting it at the top of the league table of European airlines, a position that gives O’Leary a particularly influential voice in the industry.

He sounded a more upbeat tone than some of his rivals, predicting a return to normal passenger numbers by summer 2021, provided a vaccine for Covid-19 can be developed.

He said the airline would be able to pick up business from rivals that collapse as a result of the pandemic, which has already forced Virgin Australia to file for bankruptcy and left Ryanair’s European rival Norwegian Air fighting for its survival.

Airlines including Ryanair have faced criticism for dragging their feet on giving refunds for cancelled flights, as they look to conserve cash during the pandemic.

Some of the industry’s biggest players are also trying to convince governments to bail them out, after air travel all but ceased.