US States Begin Easing Lockdowns as Virus Weakens in Asia 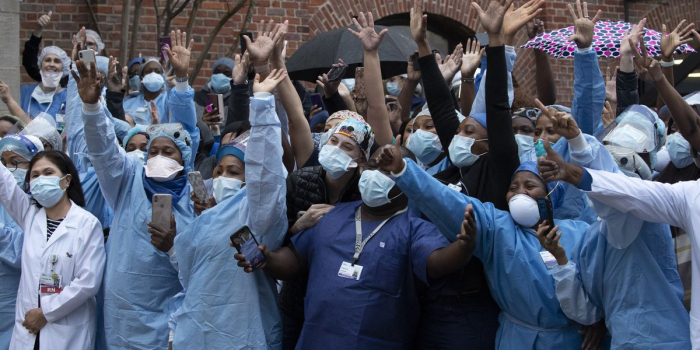 The U.S. states of Georgia, Oklahoma and Alaska began loosening lockdown orders on their pandemic-wounded businesses, even as the confirmed U.S. death toll from the coronavirus soared past 50,000 and despite warnings from health experts that such steps may be coming too early.

The news came as the outbreak appeared to continue to subside in much of Asia. In China, where the virus was first detected late last year, authorities on Saturday reported no new deaths for the 10th straight day, along with just 12 new cases, 11 of them brought from overseas and one local transmission in the northeastern province of Heilongjiang bordering Russia, according to the National Health Commission.

Just 838 people remain hospitalized in China with COVID-19 while another 1,000 are undergoing isolation and monitoring for being either suspected cases or having tested positive for the virus while showing no symptoms. China has reported a total of 4,632 deaths among 82,816 cases.

South Korea reported 10 fresh cases, the eighth day in a row its daily jump came below 20. There were no new deaths for the second straight day.

India announced the easing of a stringent lockdown for 1.3 billion people with the reopening of neighborhood and standalone shops. India has reported more than 24,500 cases and 775 deaths. Last week, it allowed resumption of manufacturing and farming activities in rural areas as millions of daily wage earners were left without work.

In France, the government is leaving families to decide whether to keep children at home or send them back to class when the nationwide lockdown, in place since March 17, starts to be lifted on May 11.

As in many countries, the tourism industry in France has been ravaged by the pandemic and a French hotel executive predicted his business will remain “catastrophic” for the rest of this year.

“Zero percent (occupancy) in April, probably in May and probably in June,” Serge Cachan, president of the Astotel chain of Paris hotels, told The Associated Press. With estimated losses this year of 60-70%, Cachan said he is counting on government help to survive.

Belgium announced that after May 3, hospitals will progressively open to some non-essential tasks and textile shops also will be allowed to reopen as the country begins relaxing safeguards. Denmark has reopened schools for the youngest grads, while in Spain, parents face the decision of whether to let kids get their first fresh air in weeks when the country on Sunday starts to ease the total ban on letting them outside.

Britain was still holding off on changes to its lockdown as the coronavirus-related death toll in hospitals fast approaches 20,000. It's the fourth highest in Europe, behind Italy, Spain and France, each of which has reported more than 20,000 deaths.

In the U.S., Republican governors in Georgia and Oklahoma allowed salons, spas and barbershops to reopen, while Alaska opened the way for restaurants to resume dine-in service and retail shops and other businesses to open their doors, all with limitations. Some Alaska municipalities chose to maintain stricter rules.

Though limited in scope, and subject to social-distancing restrictions, the reopenings marked a symbolic milestone in the debate raging in the United States and beyond as to how quickly political leaders should lift economically devestating lockdown orders.

During a White House press briefing Friday, President Donald Trump spoke optimistically of the economy but also asked people to continue social distancing and using face coverings. The same day, Trump signed a $484 billion bill to aid employers and hospitals under stress from the pandemic. Over the past five weeks, roughly 26 million people have filed for jobless aid, or about 1 in 6 U.S. workers.

Trump also said his widely criticized comments suggesting people can ingest or inject disinfectant to fight COVID-19 was an attempt at sarcasm.

The coronavirus has killed more than 190,000 people worldwide, including — as of Friday — more than 50,000 in the United States, according to a tally compiled by John Hopkins University from government figures. The actual death toll is believed to be far higher.

Amy Pembrook and her husband, Mike, reopened their hair salon in the northwest Oklahoma town of Fairview after it had been shuttered for about a month.

“We’re super excited about going back, but we have caught a little flak from people who say it’s too early,” Amy Pembrook said. “We just said we can live in fear for a long time or we can trust that everything is going to be OK.”

Without a tried-and-tested action plan for how to pull countries out of coronavirus lockdown, the world is seeing a patchwork of approaches. Schools reopen in one country, stay closed in others; face masks are mandatory in some places, a recommendation elsewhere.

Meanwhile, testing continues to lag across the United States. To date, according to data compiled by the COVID Tracking Project, just under 4.7 million people have been tested in the country of 330 million. Researchers at Harvard University have estimated a minimum of 500,000 daily tests are needed, and possibly much more, in order to safely reopen the economy.

In Florida, Gov. Ron DeSantis said his administration plans to let pharmacists administer virus tests to reach a broader range of people, including those with no symptoms who believe they may have been exposed.

In Michigan, Democratic Gov. Gretchen Whitmer lengthened her stay-at-home order through May 15, while lifting restrictions so some businesses can reopen and the public can participate in outdoor activities such as golf and motorized boating. Michigan has nearly 3,000 deaths related to COVID-19, behind only New York and New Jersey.

New York reported its lowest number of daily COVID-19 deaths in weeks on Friday. The state recorded 422 deaths as of the day before — the fewest since March 31, when it recorded 391 deaths. More than 16,000 people have died in the state from the outbreak.