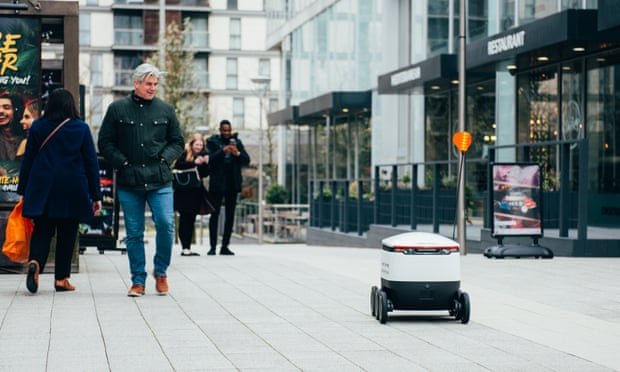 A robotic delivery service in Milton Keynes could prove to be the future of locked-down Britain, as miniature autonomous vehicles bring food deliveries to almost 200,000 residents of the town.

Starship Technologies, an autonomous delivery startup created in 2014 by two Skype cofounders, has been testing its beer cooler-sized robots in public since 2015. The small, white, six-wheeled vehicles trundle along pavements to bring small deliveries to residents and workers of the neighbourhoods in which they operate, without the need for a human driver or delivery person.

The Milton Keynes operation is the first commercial deployment in the UK, and started in mid-March, just as the country was implementing widespread social distancing in an effort to tackle the spread of coronavirus. Residents can download the Deliveroo-style Starship Deliveries app to buy cooked food and small orders from supermarkets, which gets loaded into the robots and driven to them, the Guardian reports.

Sam Crooks, the mayor of Milton Keynes, said: “I’ve got a fairly young demographic in my ward, and they love it. There was obviously a burst of use at the beginning, because of the novelty, but already it’s just a part of people’s routines.

“People are taking seriously the guidance about not going out, so something like the robot deliveries are absolutely ideal, because people can order and obtain something without going out. Particularly as their first relationship was with Tesco and the Co-op.”

Andy Curtis, the head of UK operations at Starship, said: “We’ve seen huge surges in demand since we started operating in Milton Keynes two years ago. We’re excited that both residents and workers can now enjoy this low cost and convenient benefit in the centre of Milton Keynes, and we hope that it will make the town an even more attractive place to work in the future.”

The launch of Starship’s Milton Keynes offering comes as conventional delivery services are under increasing strain. Royal Mail delivery workers have complained that they are being asked to risk their health for non-essential deliveries, and the service has had to deal with a growing number of workers taking sick leave. Gig economy delivery companies, such as Deliveroo, have come under pressure too, with their riders, who are not normal employees, worrying that they may have to continue deliveries if they get sick or lose their income entirely.

The robotics firm says demand has been high in the last week, and that it plans to expand further across the UK and US. A spokesperson said: “We’ve had grocery stores, restaurants and other delivery companies get in touch to ask for assistance from our robots. To date the robots have completed over 100,000 autonomous deliveries, travelled over 500,000 miles and completed over 5m road crossings around the world.

“We are doing everything we can to keep our customers and employees safe. All of the sanitisation processes around our service have been reviewed by experts and we’re following their guidance on operating procedures to ensure a safe and convenient service for everyone. Without robots, more humans are needed in the supply chain for delivery, and as humans are the key source of transmission – using robots decreases this risk.”

A fleet of Starship robots in Milton Keynes. Photograph: Starship Technologies
Starship is just one of a number of startups hoping that lightweight, slow, pedestrian-friendly vehicles might be the solution to normalising autonomous driving. Bigger companies like Amazon have also got involved: the retail giant has been trialling its Scout robots in Washington state. But the robots have not been without controversy. Some competitors have been revealed to have less automation than it seemed: one, Kiwi Campus in Berkeley, California, was actually being driven by people based in Colombia. The spread of the robots has led to conflicts over who has the right to use the pavements, with critics describing their potential proliferation as “ a privatisation of the public right of way”.