Malaysia cites Covid-19 for rounding up hundreds of migrants 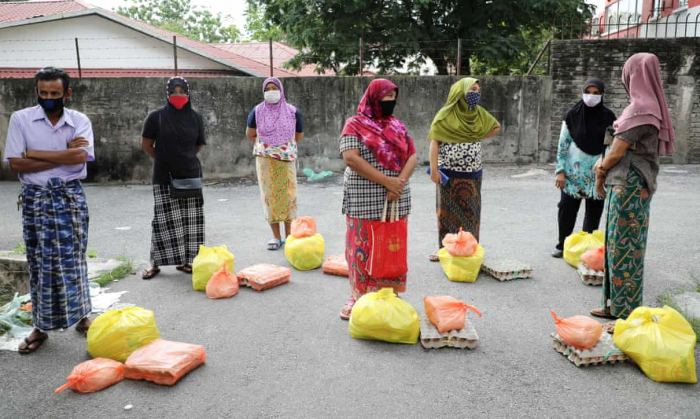 Malaysian authorities have rounded up and detained hundreds of undocumented migrants, including Rohingya refugees, as part of efforts to contain coronavirus, officials said.

Authorities said 586 undocumented migrants were arrested in a raid in the capital, Kuala Lumpur, on Friday. Armed police walked people through the city in a single file to a detention building, according to activists. The UN said the move could push vulnerable groups into hiding and prevent them from seeking treatment.

Those detained included young children and ethnic Rohingya refugees from Myanmar. Social media posts, including some by Malaysian politicians, have recently blamed Rohingya of committing crimes and accused them of dominating areas of the capital.

The xenophobic campaigns have included activists having their names and photos circulated alongside inflammatory accusations, and have injected further fear into a community struggling for food and shelter through the pandemic lockdown.

Police said the operation was aimed at preventing undocumented migrants from travelling to other areas amid movement curbs imposed to contain the spread of the virus outbreak, the state news agency Bernama reported.

The UN urged Malaysia to avoid detaining migrants and release all children, warning that overcrowded detention centres carried a high risk of increasing the virus’s spread.

“The fear of arrest and detention may push these vulnerable population groups further into hiding and prevent them from seeking treatment, with negative consequences for their own health and creating further risks to the spreading of Covid-19 to others,” the UN said in a statement.

A statement from the home minister, Hamzah Zainuddin, reiterated that the Rohingya were considered “illegal immigrants” in Malaysia, which does not recognise refugees, and “have no status, right and basis to present any demands to the government”.

Rohingya activists have denied accusations they were demanding Malaysian citizenship, which have been spread as part of a wave of abuse targeted at the community since Malaysia was criticised for refusing to allow boats of refugees to land, citing Covid-19 as a reason.

Malaysian activist Tengku Emma Zuriana Tengku Azmi, an ambassador for the European Rohingya Council, said she had been shocked by Malaysian attitudes towards the Rohingya.

“In Malaysia right now everybody is scared, anxious and worried about their situation because they can’t work, they don’t earn enough and some of the aid hasn’t reached the poor,” she said.

“They hear Rohingya boats are coming and perhaps they fear these people will steal their resources.”

Phil Robertson, Human Rights Watch’s deputy Asia director, said of the detentions: “This is perhaps the most mindless and inane thing PM Muhyiddin [Yassin] and his ministry of home affairs could have done, but they appear committed to promoting a policy of fear and xenophobia that transfers the anger of the Malaysian public on to foreigners who cannot defend themselves.”

Nay San Lwin, the co-founder of the Free Rohingya Coalition group, said the home ministry’s statement “made us like we are less than human”.

“I have never expected Malaysia will treat us like [it is] now but sadly it is happening,” he said. “I have only one message for Malaysians – restore your humanity.”

John Quinley, of Fortify Rights, said: “During the Covid-19 pandemic there has been a growing anti-Rohingya campaign in Malaysia. Both citizens and politicians have been pushing a narrative implausibly linking the spread of the virus to Rohingya communities.

“Now authorities in Malaysia are conducting immigration raids in the capital instilling fear in refugee and migrant communities. What they should be doing is building trust and providing health services during this time.”