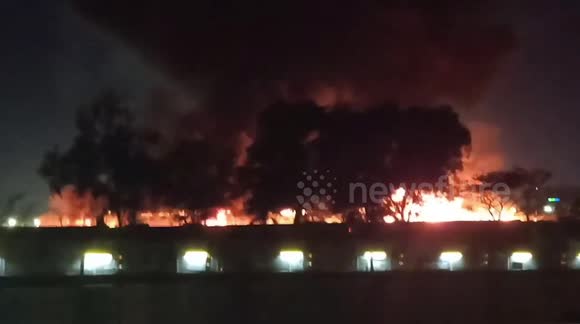 A plane carrying vital medical supplies has crashed near an airport in Argentina with two passengers rushed to hospital, AzVision.az reports citing Mirror.

At least four people are understood to have been on board when the aircraft crashed near the Esquel Airport, in the Chubut province of Argentina, say local media.

It has not been confirmed whether there were any deaths. Radio Nacional reports two people were wounded after the crash and transferred to Esquel hospital.

A huge blaze erupted at the crash site, with firefighters and police officers quickly on the scene.

Some reports suggest the flight was bound for Santa Fe.

It is understood the plane was close to landing in Esquel in the middle of an intense fog which caused reduced visibility.

According to news outlet, elPatagonico, the plane was carrying a doctor, a nurse and two crew members.

Local newspaper El Chubut reported the aircraft - a Learjet 35A - was coming from the north when it crashed close to the airport.

The outlet also revealed relatives of the victims have not yet been notified as their names have not been officially announced.

ElPatagonico also reported the plane was on its way to transfer a patient who required care that could not be provided in the area of Chubut.

"The plane was arriving from the province of Santa Fe and the accident would have been caused by the presence of fog, which made landing maneuvers difficult," said the newspaper.

The plane, which was carrying medical supplies crashed in the Chubut area where there have been four confirmed cases of coronavirus.