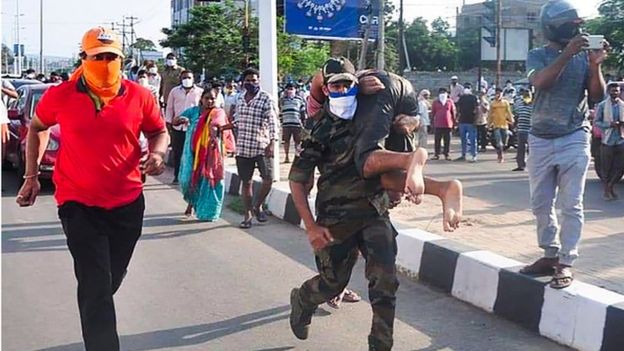 At least 13 people have been killed by a massive gas leak at a chemical plant in southern India, with hundreds of others taken to hospital.

The leak from the LG Polymers plant in the city of Visakhapatnam in Andhra Pradesh state came as people slept.

Doctors say patients have been complaining of a burning sensation in the eyes and difficulties breathing.

Areas around the plant have been evacuated. The leak may have been due to negligence, officials say.

Reports suggest initial attempts to control the gas leak were unsuccessful but the company and state officials say the situation is now under control.

Rajendra Reddy, a senior official in the Andhra Pradesh Pollution Control Board, told the BBC that the leaked gas was styrene, which is usually refrigerated.

'My eyes were itchy'

The leak took place at around 03:00 local time (21:30 GMT Wednesday) when plant was being re-opened for the first time since 24 March, when India went into lockdown to curb the spread of coronavirus.

"All those who have been hospitalised are currently stable," BK Naik, a local health official, told Reuters news agency. Some reports said patients were unconscious, or on ventilators.

The state Industries Minister Goutam Reddy told BBC Telugu that it looked as though proper procedures and guidelines were not followed when the South Korean-owned plant was being re-opened.

Swaroop Rani, a senior police official in Visakhapatnam, told AFP that the plant had been left idle because of the lockdown.

"[The gas] was left there because of the lockdown. It led to a chemical reaction and heat was produced inside the tanks, and the gas leaked because of that."

Local villagers complained around 03:30 and police immediately went to the scene, but had to quickly retreat for fear of being poisoned, the news agency quoted her as saying.

"One could feel the gas in the air and it was not possible for any of us to stay there for more than a few minutes," she said.