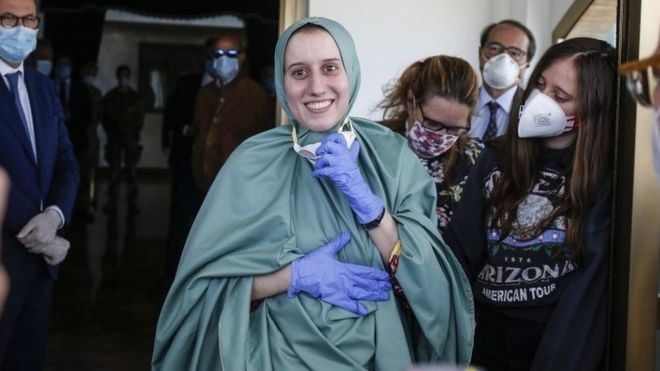 An Italian aid worker, who was abducted in Kenya in November 2018, has been flown back to her home country.

Silvia Romano, 25, embraced her parents and sister, and was greeted by Italy's prime minister and foreign minister after she landed in Rome.

She was freed from suspected Islamist group al-Shabab near Somalia's capital Mogadishu on Saturday, reports say.

Italy's secret service is said to have been assisted by Turkey and Somalia to secure her release.

No group has claimed responsibility for the abduction 18 months ago.

In January 2019, the Somalia-based al-Shabab said it was behind the attack on a hotel and office complex in Kenya's capital Nairobi, in which 21 people died.

After landing in Rome's Ciampino airport on Sunday, Ms Romano said he was feeling well, both "physically and mentally".

She was seen accompanied by masked men from the Italian secret service.

Church bells were rung and people applauded from their balconies in Ms Romano's hometown of Milan to celebrate her return.

Ms Romano, who works for the Italian charity Africa Milele Onlus, was seized by gunmen from a small rural hotel in Kilifi Country, south-eastern Kenya, in 2018.

She is believed to have been later taken to Somalia.

Ms Romano was the first foreigner to be kidnapped in Kenya since the country had a spate of abductions that threatened its tourism resurgence in 2011.

In April 2019, two Cuban doctors were seized in north-eastern Kenya, and are believed to have been taken to Somalia.

Al-Shabab is thought to have been responsible for killing a British man and kidnapping his wife from a resort island in 2011.

A few weeks later, a disabled French woman was taken from her home on the Lamu archipelago and reportedly died while in captivity.

Two Spanish aid workers were abducted in the same year by suspected jihadist gunmen from the Dadaab refugee camp close to the Somali border. They were freed 21 months later.