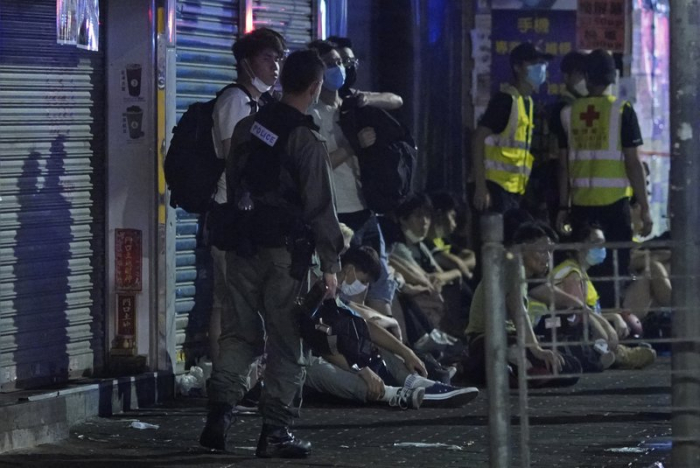 More than 200 people were arrested during anti-government protests on Sunday night, according to Hong Kong media reports.

Police have not released a tally but said around midnight that they were conducting dispersal and arrest operations after giving repeated warnings. They said the protesters chanted slogans and built barriers to block roads in the city’s Mongkok district, and set fires on some streets.

A pro-democracy movement that paralyzed Hong Kong for months last year has shown signs of reviving in recent weeks as the coronavirus threat eases. The government recently decided to allow public gatherings of eight people, up from four previously.

The Apple Daily newspaper said more than 200 people were arrested, and the South China Morning Post put the total at more than 250. Both cited unnamed sources. Police were tabulating the arrests and expected to release numbers later Monday.

The nighttime street action followed multiple protests at shopping malls earlier in the day. Protesters are demanding full democracy in the semi-autonomous Chinese city and an investigation into alleged police brutality in suppressing the demonstrations.

The protests were sparked by a now-abandoned extradition bill that would have allowed criminal suspects to be sent to mainland China to face trial. China’s judicial system is murkier than Hong Kong’s and does not guarantee the same rights to the accused.