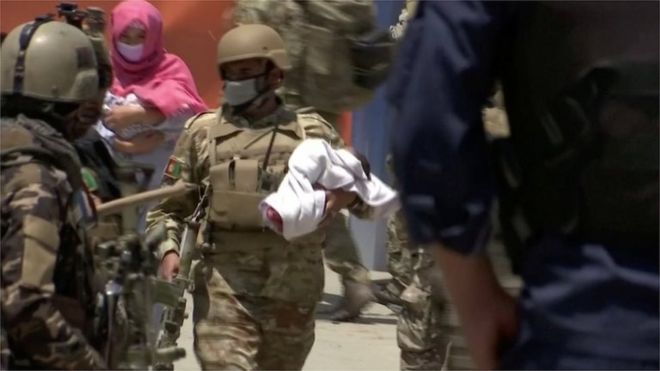 The number of people who were killed in a militant attack on a maternity ward in the Afghan capital has risen to 24.

Mothers, newborn babies and nurses were among the victims. At least 16 people were injured, the health ministry said.

Tuesday's attack in Kabul prompted widespread condemnation. No group has said it carried it out. A bombing at a funeral in the east killed at least 26.

President Ashraf Ghani has ordered the resumption of offensive operations against the Taliban and other groups.

He accused the militants of ignoring repeated calls for a reduction in violence.

The Islamic State (IS) group said it was behind the attack on a police commander's funeral in Nangarhar, in the east of the country. It is still not clear who carried out the attack at the Dasht-e-Barchi hospital in Kabul, and the Taliban have denied any involvement.

Relatives of the babies whose mothers were killed have gathered awaiting news of what will happen to the infants, the New York Times reported.

In all, about 100 people were killed in violence around Afghanistan on Tuesday, the paper said. The attacks underline the fragility of peace efforts, and have dimmed hopes for an end to decades of war.

What happened at the hospital?

The Kabul attack began at about 10:00 (05:30 GMT) on Tuesday, and locals described hearing two blasts then gunfire. One doctor who fled during the assault told the BBC about 140 people were in the hospital when the gunmen attacked.

A maternity ward in the hospital is run by the international medical charity Médecins sans Frontières (MSF) and some of those working there are foreigners.

Ramazan Ali, a vendor who saw the attack begin, told Reuters news agency: "The attackers were shooting at anyone in this hospital without any reason."

Afghan special forces rescued 100 women and children, including three foreigners, an official told the BBC. The three attackers, who reportedly had gained access dressed as police officers, were all killed by security personnel after a battle lasting hours.

In the past, similar attacks in this mostly Shia area of the capital have been attributed to IS. The group's leader in South Asia and the Far East was arrested in Kabul on Monday, with two other high profile members, Afghan intelligence said.