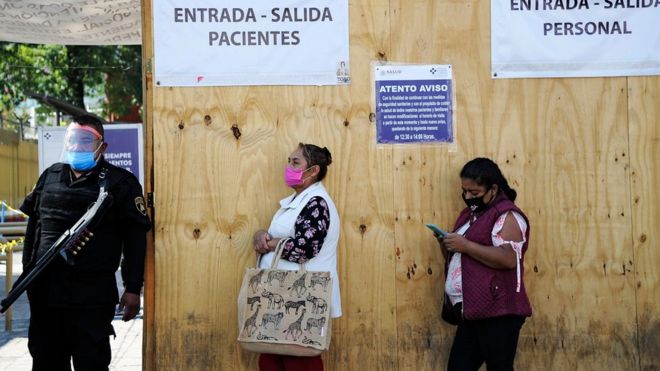 Mexico has reached "the peak moment" of its coronavirus outbreak, officials said, as the country recorded its largest one-day rise in cases so far, AzVision.az reports citing BBC News.

More than 2,409 new cases of the virus were confirmed on Thursday - the first time this figure has exceeded 2,000.

The total number of confirmed cases in the country is now more than 40,000.

The grim milestone comes amid preparations to ease lockdown measures and reopen the economy, particularly factories near the border with the US.

Assistant Health Secretary Hugo López-Gatell - an epidemiologist and Mexico's coronavirus tsar - described this as "the most difficult moment of the first wave of the epidemic".

He said that the country "could not relax measures" in place to stem the spread of the virus, and instead needs to embrace a "new normal" to avoid another wave of infections.

On Monday, some key industries - including mining, construction and automobile assembly - are scheduled to partially reopen.

Mr López-Gatell stressed that the re-opening of these industries will be largely preparatory, with a broader restart of businesses not scheduled until 1 June.

Government data released on Thursday also showed more than half of hospitals in the capital, Mexico City, were at capacity with coronavirus patients.

At the end of April, hospitals in the city admitted they were having to turn patients away because of a lack of equipment.

Earlier this month, Mexico received a shipment of more than 200 ventilators purchased from a US firm.

This followed an informal agreement between the neighbouring nations' leaders in mid-April.