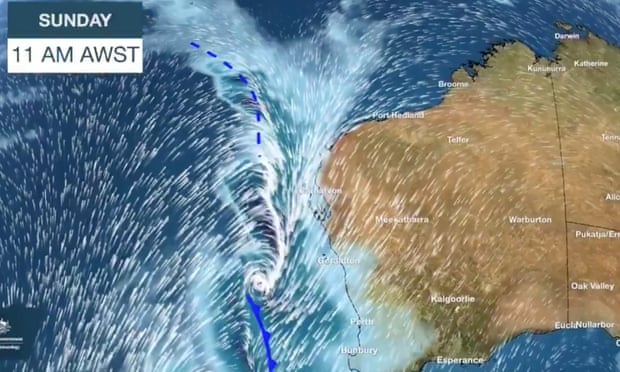 The Bureau of Meteorology said the storm – the remnants of Tropical Cyclone Mangga combined with a cold front – represented an “unusually widespread severe weather event”.

Warnings were issued for damaging winds up to 100km/h, heavy rain and massive waves from Albany to the Kimberley Coast – a distance of about 3,000km.

“So it’s a once-in-a-decade-type system and it’s from a different angle,” Broomhall said.

“Normally our storms come from the south-west and this will come from the north-west so it will test people’s buildings, sheds and all those unsecured items, so we’re asking people to secure property and make sure everything loose is tied down.”

DEFS warns the “unusual weather” could cause significant damage to homes and make travel dangerous.

A “take action now” alert was issued on Sunday for most of the state, including Perth and the Great Southern region, as well as parts of the Pilbara in WA’s north and the Goldfields in the south-east.

Residents were warned to unplug electrical appliances, avoid using landline phones if there was lightning, close curtains and blinds, and stay away from windows.

Anyone stuck outside was urged to find safe shelter away from trees, powerlines, storm water drains and streams.

Motorists were warned to watch for hazards, such as debris, and to not drive into water of unknown depth and current.

“We haven’t yet requested interstate assistance, we’ll wait and see what the impact is, but we have had discussions already with the Australian defence force locally for what they can help us with.”

The Bureau of Meteorology said strong and squally winds would hit the state’s north on Sunday morning, then move south to Perth and Albany in the afternoon and evening.

Residents in coastal areas from as far north as Exmouth and south to Augusta were specifically warned of the potential of a dangerous storm tide.

Peak wave heights in excess of eight metres were predicted for the south-west coast on Monday, causing significant beach erosion.

“This is a rare event for WA due to the extent of the area affected and the possibility of multiple areas of dangerous weather,” the Bureau of Meteorology said.