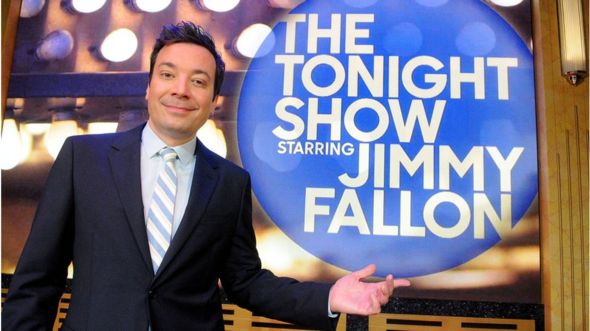 The clip went viral on Monday, and led to calls for Fallon to quit the show.

In his apology on Tuesday, Fallon said there was "no excuse" for his actions, and thanked the public "for holding me accountable".

Several politicians and media figures, as well as Canadian Prime Minister Justin Trudeau, have been embroiled in recent blackface scandals.

In the skit, Fallon wore blackface to impersonate fellow Saturday Night Live cast member Chris Rock, who is African American, depicting him as making a joke about crack cocaine.

As the hashtag #JimmyFallonIsOverParty trended on Twitter on Tuesday, Fallon released a statement apologising for the 20-year old skit.

"In 2000, while on SNL, I made a terrible decision to do an impersonation of Chris Rock while in blackface," he wrote.

"There is no excuse for this. I am very sorry for making this unquestionably offensive decision and thank all of you for holding me accountable."

Chris Rock has not yet made any public statement about the sketch.

Saturday Night Live, which has been on air since 1975, has a history of having non-black actors portray African-Americans.

The controversy also drew some social media commentators to point out that other comedians, such as late night host Jimmy Kimmel and Sarah Silverman have also performed televised comedy sketches in blackface.

NBC, the network that employs Fallon, fired news anchor Megyn Kelly in 2018 after she made controversial comments defending the use of blackface.

More recently, the Canadian prime minister and Virginia Governor Ralph Northam have both successfully resisted calls to resign for wearing blackface when they were younger.

Blackface has a history of perpetuating offensive and racist stereotypes of African Americans dating back more than 200 years in the United States.

"It's a tradition rooted in racism which is very much about the fear of black people and the laughing at black people," Dr Kehinde Andrews, Associate Professor in Sociology at Birmingham City University told the BBC in 2017.