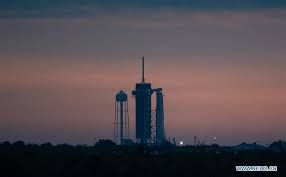 "Due to the weather conditions, the launch is scrubbing," NASA tweeted.

SpaceX said the launch was delayed due to unfavorable weather in the flight path.

The next launch opportunity is scheduled on Saturday, May 30 at 15:22 Eastern Time.

"No launch for today - safety for our crew members is our top priority," NASA Administrator Jim Bridenstine tweeted.

The countdown was halted less than 17 minutes before the SpaceX Falcon 9 rocket was due to lift off from historic Launch Complex 39A at the Kennedy Space Center. Propellant is offloading and the two astronauts are preparing to exit the vehicle, according to NASA.

It will be the first time since 2011 that American astronauts launch on an American rocket from American soil to the ISS.

This is SpaceX's final test flight for NASA's Commercial Crew Program and will provide critical data on the performance of the Falcon 9 rocket, Crew Dragon spacecraft, and ground systems, as well as in-orbit, docking, and landing operations.