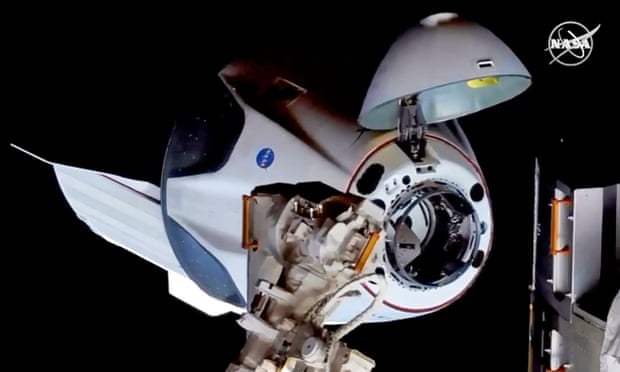 A mere 19 hours after blasting off from Florida, and with a short break for a burst of Black Sabbath in between, two Nasa astronauts docked the SpaceX Dragon crew capsule to the International Space Station (ISS) on Sunday in another milestone moment for their historic mission.

The precision move, 262 miles about Earth, both spacecraft traveling at 17,500mph, was the first time since July 2011 that a US-built human-rated vehicle, the long-retired space shuttle Atlantis, had completed such a rendezvous.

It was also the first pairing in space featuring a crewed spacecraft constructed by a private entity, the SpaceX company founded by the billionaire entrepreneur Elon Musk, who broke down in tears at a post-launch press conference on Saturday.

SpaceX confirmed docking was made at 10.16am ET above the China-Mongolia border, the crew of the ISS ringing the station’s bell three times in maritime tradition to signal the new arrival.

It was a particularly poignant moment for astronaut Doug Hurley, who piloted the 2011 mission that closed the 30-year shuttle programme and now the first crewed test flight under Nasa’s $6.2bn private-public partnership known as the commercial crew programme.

“It’s been a real honor to be a small part of this nine-year endeavour since the last time a United States spaceship has docked with the ISS,” Hurley said, noting that the SpaceX Dragon was only the first of a new generation of privately-built spacecraft, including Boeing’s CST100-Starliner, that will eventually carry humans.

“This is an incredible time to be at Nasa … new vehicles to be flown, continuing missions in lower earth orbit and then to the moon and Mars.”

Hurley and crewmate Bob Behnken began docking day on Sunday with Black Sabbath’s Planet Caravan played to them by mission controllers in Hawthorne, California, a musical interlude ahead of their reunion with Nasa colleague Chris Cassidy, who has been aboard the ISS since mid-April.

The two Americans, both spaceflight veterans, will spend up to four months orbiting Earth while engineers from SpaceX analyze every aspect of their spaceship’s performance. A successful splashdown sometime this summer will pave the way for regular operational missions as early as August.

In a long-held tradition, the astronauts got to choose a name for their spaceship, and announced several hours after their spectacular lift-off from the Kennedy Space Center in Cape Canaveral they were honoring a shuttle orbiter they both flew aboard.

“Without further ado, we would like to welcome you aboard capsule Endeavour,” Hurley said.

“We chose Endeavour for a few reasons, because of this incredible endeavour Nasa, SpaceX and the United States have been on since the end of the shuttle program back in 2011.

“The other reason is a little more personal to Bob and I. We both had our first flights on shuttle Endeavour, and it just meant so much for us to carry on that name.”

Nasa’s flight managers in Houston had welcoming words for the crew after assuming control of Behnken and Hurley’s mission following Endeavour’s docking.

“For the first time since the retirement of the space shuttle, you have completed a historic ride to the ISS and have opened up a new chapter in human space exploration,” Joshua Kutryk, a space station mission controller declared.

“To our SpaceX colleagues, bravo on a magnificent moment in spaceflight history and on the start of a new journey that has changed the face of space travel in this new era of space transportation.”

Saturday’s groundbreaking launch, which took place at 3.22pm ET after being delayed by poor weather from Wednesday, lit the skies over Cape Canaveral as the Falcon 9 rocket blazed a trail across the Atlantic ocean on a 12-minute journey to orbit. The capsule could be seen in the skies above the UK, chasing down the ISS.

“It’s been way too long,” Jim Bridenstine, the Nasa administrator, said of the launch. “It was just an amazing day. I’m breathing a sigh of relief but I won’t be celebrating until Bob and Doug are home safely.”

Musk, the founder of PayPal and the electric car manufacturer Tesla, was emotional at a press conference following the launch, which was attended by Donald Trump and Mike Pence, the US vice-president.

“It is the culmination of an incredible amount of work by the SpaceX team, by Nasa, and by a number of other partners,” he said. “You can look at this as the results of a hundred thousand people roughly when you add up all the suppliers and everyone working incredibly hard to make this day happen.”