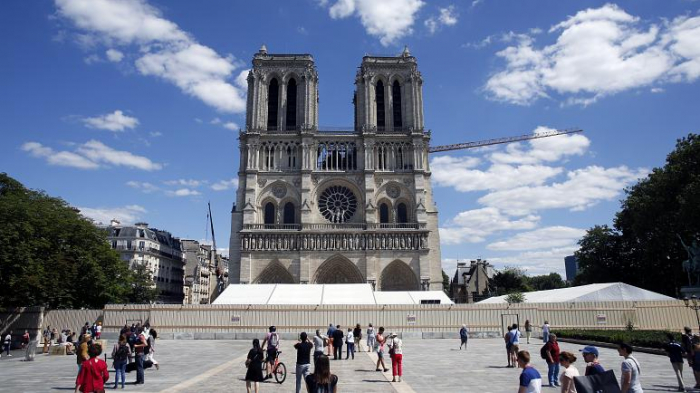 Notre Dame Cathedral's forecourt opened up to the public for the first time since the devastating fire of April 15 last year.

The body overseeing the Gothic structure's restoration issued a statement on Sunday saying that the reopening was finally made possible after several deep cleaning operations took place to remove toxic lead dust from the large forecourt.

Dozens of tons of lead went up in flames during the fire, sending tons of poisonous dust onto the surrounding ground.

Paris Mayor Anne Hidalgo joined senior clergy on a visit to the area on Sunday afternoon, saying it was an "immense pleasure" to catch up with them "for the reopening of the Notre Dame forecourt", which she described as a form of "renaissance".

French Culture minister Franck Riester said the reopening was "a very important moment", adding that it was delayed "because of lead pollution and questions of confinement".

To protect public health, the site will continue to be regularly cleaned, and samples will be taken for monitoring and analysis purposes.

The cathedral is still closed and will remain closed until 2024, at least.

At the moment it is unclear whether a chapel will be installed in the forecourt before that date.

However, Paris Archbishop Michel Aupetit said that there is probably going to be something "more modest", possibly a representation of the Virgin Mary.