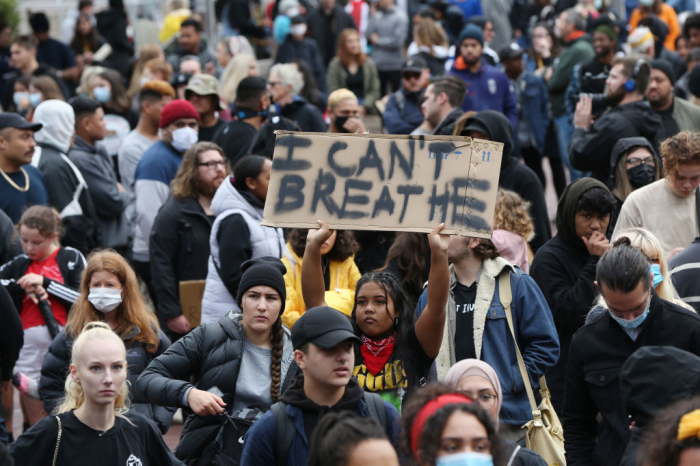 The event was part of a number of protests around the globe, from London and Berlin to Australia and the Netherlands, after video showed a white Minneapolis police officer kneeling on Floyd’s neck for nearly nine minutes before he died last Monday.

The incident touched off outrage in the United States in the midst of a polarizing presidential campaign and recently released from strict stay-at-home orders during the coronavirus pandemic that threw millions out of work.

Protesters in New Zealand’s Auckland city sat on the road after their peaceful march as they raised clenched fists in a sign of unity, solidarity and Black Power.

Social media posts showed demonstrators outside the American Consulate in Auckland wielding posters that read “Justice For George Floyd” and “Are We Next?”.

A candlelight vigil is also being planned in Wellington on Monday evening.

Across the Tasman Sea in Australia, demonstrations are expected on Tuesday evening.

In an email to American citizens living in Australia, the U.S. consulate said its Sydney city offices would shut early on Tuesday as a result. “Police expect counter protesters,” the email read, without providing further details.