Mumbai bracing for the 'first cyclone in 129 years' 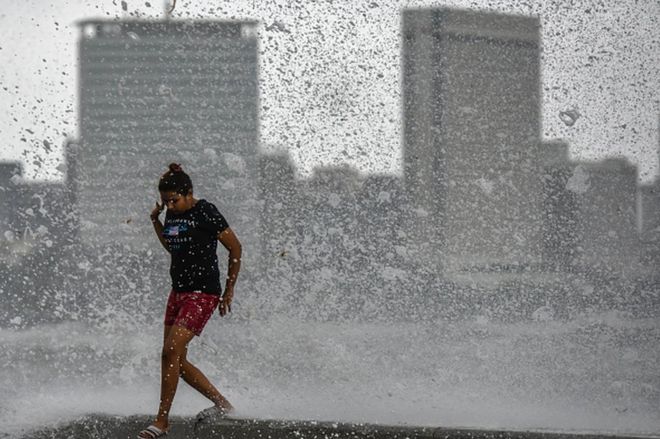 "The sea was brought into the city by the wind; the waves roared fearfully; the tops of the churches were blown off and the immense stones were driven to vast distances; two thousand persons were killed."

This was how a Portuguese historian described one of the earliest recorded powerful storms in Mumbai in May 1618. In the 17th and 19th Century, the western Indian city was hit by deadly storms and cyclones. Mumbai experienced severe floods in 2005, and more recently in 2017 and 2019, but none of them were due to cyclones.

The heaving city of 20 million people, which is India's financial and entertainment capital, has been spared of cyclones in modern history. Mumbai hasn't "experienced a serious cyclone landfall since 1891", Adam Sobel, a professor of atmospheric science at Columbia University, told me.

All that could change on Wednesday when a severe cyclonic storm with wind speeds from 100 to 120 kmph (60 to 75 mph) could hit the city and India's western coast. India's meteorological department is predicting heavy rainfall, squally winds, very rough seas and storm surges inundating low lying areas of the city. It is monitoring whether it will be as intense as Cyclone Amphan which devastated parts of West Bengal and took more than 90 lives last fortnight.

On Monday evening, Prof Sobel, who has researched Mumbai's cyclone preparedness, told me that the latest track of what is likely to be named Cyclone Nisarga "takes it right over Mumbai as a severe cyclonic storm with maximum wind speeds of 110 kmph". In the US system, he says, this would be "a strong tropical storm, not quite a hurricane". (Tropical storms in North Atlantic Ocean and Northeast Pacific are called hurricanes.)

"The track forecast is bad for Mumbai, but the intensity forecast is good relative to what it was 12 hours ago when some models were predicting it could become much more powerful," he said.

"So the chance of a worst-case scenario is now greatly reduced. However, a severe cyclonic storm can still be dangerous, so people should be prepared. And there is still time for things to change, so everyone in the area should monitor the forecast completely," he added. Mumbai has been put on "orange" alert with the "possibility of extremely heavy rain to a very heavy rainfall at a few places".

What makes Mumbai vulnerable, say, experts, is that it is a densely packed, low lying city completely exposed to the sea. The low lying areas can easily experience flooding in the event of a bad storm surge or very heavy rains. This time, the city is also battling a Covid-19 outbreak - the state of Maharashtra, of which Mumbai is the capital, accounts for more than a third of India's reported infections.

Amitav Ghosh, a leading novelist who has written extensively on climate change, says there has been an increase in cyclonic activity in the Arabian sea in the last couple of decades. A 2012 paper predicts a 46% increase in tropical cyclones in the Arabian Sea by the end of the century. And between 1998 and 2001, three cyclones hit the subcontinent north of Mumbai, claiming over 17,000 lives, he notes.

In his book The Great Derangement: Climate Change and the Unthinkable, Ghosh wonders what would happen if a Category 4 or 5 storm, with wind speeds 240 kmph or higher, barrels into Mumbai?

"Mumbai's previous encounters with powerful cyclones occurred at a time when the city had considerably less than a million inhabitants. Today, it is the second-largest municipality in the world with a population of over 20 million," he writes.

"With the growth of the city, its built environment has also changed so that weather, that is by no means exceptional, often has severe effects: monsoon downpours, for instance, often lead to flooding nowadays.

"With an exceptional event, the results can be catastrophic."

It has already happened once, and the city didn't even experience a cyclone.

In July 2005, Mumbai received one of the highest rainfall totals ever recorded in a single day anywhere in the world - 94.4 cm in 14 hours.

The deluge submerged roads, shut down communication networks and electricity, stranded a couple of million people, and knocked out public transport. More than 500 people were killed, washed away, buried in landslides, electrocuted or simply suffocated in their drowning cars. Residents will be praying that the nightmare doesn't return.