'No justice, no peace': Tens of thousands in London protest death of Floyd 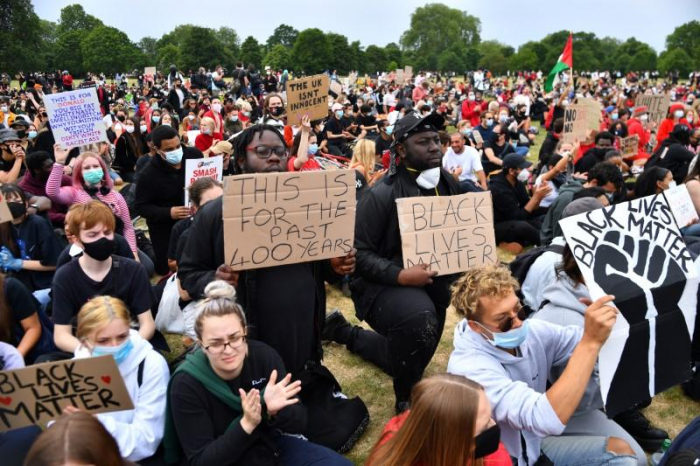 Tens of thousands of people chanting “no justice, no peace, no racist police” marched through central London on Wednesday to protest against racism after the death of George Floyd in Minneapolis.

Floyd, an unarmed black man, died after a white police officer knelt on his neck, an event that has set off the biggest anti-racism protests seen in the United States since the 1960s.

Demonstrators have also come out in cities around the world in solidarity with Floyd and to express anger over racism.

In London’s Parliament Square, thousands knelt on one knee, a form of protest known as “taking a knee” famously used by American footballer Colin Kaepernick to denounce police brutality against black people.

The London march started in Hyde Park before winding its way to Parliament Square. Many of the protesters chanted “George Floyd” and “Black lives matter”.

“We’ve come here with our friends to sound the alarm, to make noise, to dismantle supremacist systems,” Koromah said, cautioning that unless there was action the United Kingdom would face problems like those in the United States.

“I don’t want to start crying,” she said of the images from the United States. “It makes my blood boil.”

The demonstrators booed as they walked past 10 Downing Street, official residence of Prime Minister Boris Johnson, and some also booed and took a knee in front of New Scotland Yard, London’s police headquarters.

Some protesters waved banners with slogans such as: “The UK is not innocent: less racist is still racist”, “Racism is a global issue” and “If you aren’t angry you aren’t paying attention”.

Johnson said black lives mattered and he supported the right to protest in a lawful and socially-distanced way, given the coronavirus epidemic.

“Of course, black lives matter and I totally understand the anger, the grief that is felt not just in America but around the world and in our country as well,” he told parliament.

Johnson has been criticised in the past for comments that many considered racist. In 2018, when he was foreign minister, he wrote in a newspaper column that Muslim women wearing burkas looked like bank robbers or letterboxes.

Outside Downing Street, some protesters chanted “Boris is a racist”.

British police chiefs said they were appalled by the way Floyd lost his life and by the violence that followed in U.S. cities but called on protesters in the United Kingdom to work with police as coronavirus restrictions remain in place.

Many marchers said racism was a British problem too.

“It’s not like this is just about someone dying, we live our lives made awfully aware of our race. That’s not right, that’s not the natural order,” said Roz Jones, who came to Britain as a child from South Africa.

Wednesday’s London rally followed a march to the U.S. embassy on Sunday.