'Your lives matter': Obama offers words of hope in contrast to Trump's division 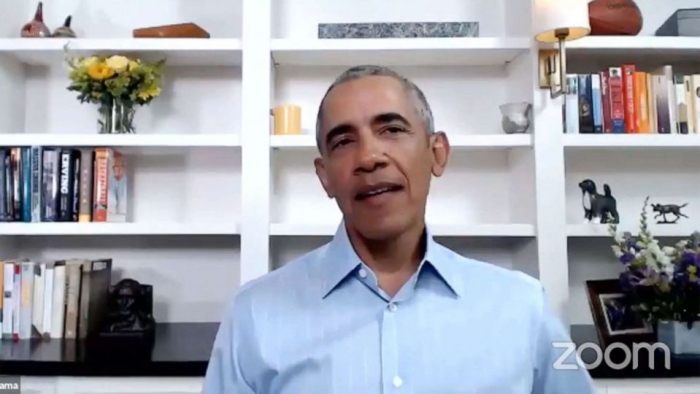 Barack Obama has told young people of colour “your lives matter” in public remarks that supporters welcomed as an antidote to Donald Trump’s racially charged and divisive threats to crack down on civil dissent.

America’s first black president on Wednesday expressed faith in young people in the US and said he remained “optimistic” about the future despite the police killing of George Floyd and mounting crises that Trump’s critics say leave the country crying out for leadership.

Obama spoke at an event by the My Brother’s Keeper alliance, a program of the Obama Foundation, that was called “Reimagining Policing in the Wake of Continued Police Violence.” It was the first public appearance by the 44th president since Floyd was killed by a white Minneapolis police officer kneeling on his neck, sparking nine days of nationwide protests that have been mostly peaceful but marred by some incidents of violence.

In striking contrast to the White House incumbent, whose expressions of sympathy for Floyd have been overshadowed by harsh warnings that the US military could be deployed to impose law and order, Obama at one point spoke directly to young men and women of color.

“And you should be able to learn and make mistakes and live a life of joy without having to worry about what’s going to happen when you walk to the store, or go for a jog, or are driving down the street, or looking at some bird in a park.”

He added: “So I hope that you also feel hopeful even as you may feel angry because you have the potential to make things better and you have helped to make the entire country feel as if this is something that’s gotta change. You’ve communicated a sense of urgency that is as powerful and as transformative as anything that I’ve seen in recent years.”

President Obama calls for people to VOTE: "I've been hearing a little bit of chatter in the Internet about 'voting vs. protest'... This is not an either-or. This is a both-and."

Obama then paid tribute to police officers who have shown solidarity with demonstrators. “I want to acknowledge the folks in law enforcement that share the goals of reimagining policing.”

But he also urged police reforms, including a ban on shooting at moving vehicles and on some forms of restraint used by the police. “Chokeholds and strangleholds, that’s not what we do,” he said. “I’m urging every mayor in this country to review your use-of-force policies with members of your community and to commit to reforms.”

Trump’s strongman response, which contrasts with his support for armed white demonstrations against pandemic lockdowns in Michigan and elsewhere, has drawn fierce condemnation from Obama’s former vice-president, Joe Biden, and other Democrats.

But not for the first time, Obama, whose wife, Michelle, once famously pledged “When they go low, we go high”, swerved past a direct engagement with Trump’s actions and instead offered an alternative vision of the future. His criticisms of the president were implicit in certain silences and certain themes.

“As tragic as these past few weeks have been, as difficult and scary and uncertain as they’ve been, they’ve also been an incredible opportunity for people to be awakened to some of these underlying trends and they offer an opportunity for us to all work together,” he said, wearing a light blue shirt with open collar against the backdrop of a bookcase.

“When sometimes I feel despair, I just see what’s happening with young people all across the country, and the talent, and the voice, and the sophistication that they’re displaying and it makes me feel optimistic. It makes me feel as if this country’s going to get better.”

Obama said he hoped the protests would translate into policy change to ensure safer policing and increased trust between communities and law enforcement. “This is a not an either/or. This is a both/and. To bring about real change, we both have to highlight a problem and make people in power uncomfortable. But we also have to translate that into practical solutions and laws.”

He also noted that many comparisons had been made with the turmoil of riots, assassinations and anti-war protests in the 1960s. But the current protests, he contended, were “a far more representative cross-section of America out on the streets peacefully protesting and who felt moved to do something because of the injustices … That didn’t exist back in the 1960s, that kind of broad coalition.”

He added: “There is a change in mindset that’s taking place, a greater recognition that we can do better. And that is not a consequence of speeches by politicians … that’s a direct result of the activities and organising and mobilisation and engagement of so many young people.”

Obama grappled with police brutality against African Americans as president, including in Ferguson, Missouri, where clashes broke out after the death of 18-year-old Michael Brown. Obama’s justice department moved to enact broad policing reforms, though most were halted under the Trump administration.

The former president endorsed Biden’s campaign in April and is expected to be a prominent surrogate for him as the November election against Trump draws nearer.

Obama was introduced by Playon Patrick, a youth leader at My Brother’s Keeper from Columbus, Ohio, who delivered an impassioned reading of a poem. It concluded: “America, the land of the free and home of the brave. We fought and died for that slogan right beside our white brothers. Doesn’t that make us worth something? Tonight, a riot is the language of the unheard.”