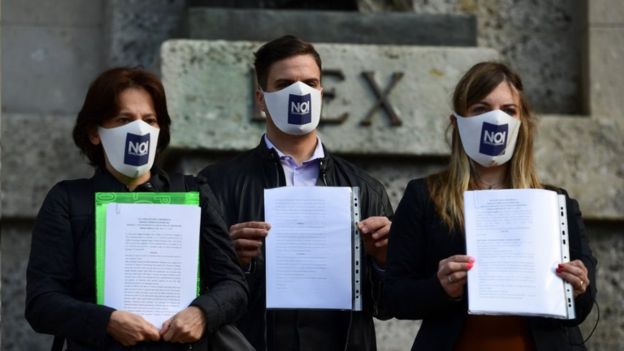 Prosecutors from northern Italy are to question Prime Minister Giuseppe Conte on Friday after relatives of Covid-19 victims demanded an inquiry into alleged government negligence.

The prosecutors have travelled to Rome from Bergamo, the city near Milan worst hit by coronavirus before the whole country was locked down in March.

Mr Conte said he was "not at all worried" about the questioning.

Relatives argue that virus hotspots should have been isolated earlier.

Fifty legal complaints were filed on Thursday at the Bergamo prosecutor's office by a citizens' group called Noi Denunceremo (We Will Report).

The group consists of bereaved relatives of Covid-19 victims, who say two Lombardy towns - Alzano and Nembro - should have been declared "red zones" as soon as the outbreaks were detected there.

It is the first legal group action in Italy triggered by the pandemic. But the Lombardy region is governed by the right-wing opposition League party, and many have blamed them, rather than the central government, for alleged failures in the coronavirus response.

The prosecutors aim to determine if there are grounds for any charges of criminal negligence.

Lombardy was where the virus first started spreading in Europe and more than half the victims in Italy died in the region.

On Thursday, Italy's official coronavirus death toll stood at 34,114 - the second highest figure in Europe after the UK, and fourth-highest in the world.

But Italy's infection rate has been brought down, enabling the authorities to gradually ease draconian restrictions.

Mr Conte said: "I will conscientiously set out all the facts of which I have knowledge. I am not at all worried.

In a BBC interview in early April, Mr Conte denied claims that he had underestimated the crisis. He said that if he had ordered a lockdown at the beginning, when the first virus clusters were detected, "people would have taken me for a madman".

He dismissed the suggestion that Italy could have rapidly imposed a big lockdown like the one in the Chinese city of Wuhan.

Lombardy officials say locking down virus hotspots was a central government responsibility. The region's Health Minister Giulio Gallera has said it was clear from 23 February that Alzano and Nembro had many cases.

But Mr Conte, who heads a centre-left coalition government, hit back by saying "if Lombardy had wanted to, it could have made Alzano and Nembro red zones", AFP news agency reported.