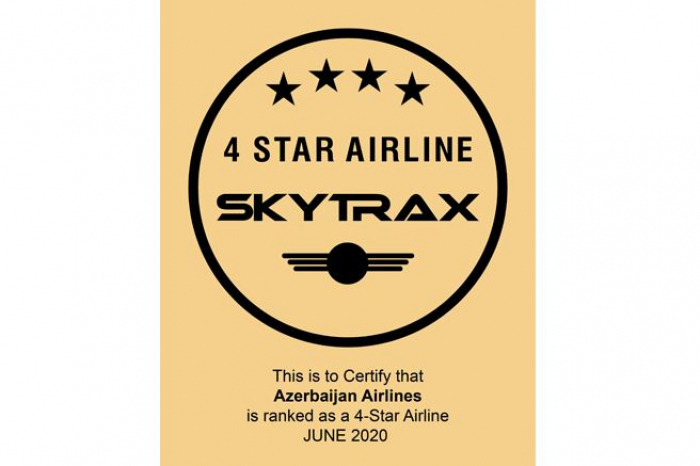 “Azerbaijan Airlines” was first awarded this prestigious rating in 2015 and has since confirmed it.

According to the results of an audit conducted by Skytrax experts, “Azerbaijan Airlines” is listed along with recognized leaders in the global aviation market in terms of comfort during flights and quality of service.

“We have a sense of immense pride since such a reputable organization in the field of audit of airline services - Skytrax - once again highly rated our activities. This is another significant achievement and recognition in the international arena which results from the hard work of the unified team of “Azerbaijan Airlines”. I would also like to commend the constant attention of the President of the country, Mr. Ilham Aliyev, to the civil aviation of Azerbaijan. Thanks to the care and support of the head of state, “AZAL” was able to achieve incredible success and reach new heights. And despite the temporary air travel restrictions around the world due to the COVID-19 pandemic, with the resumption of regular flights, high level of passenger service and flight safety will continue to be our priority goals,” - said the President of “AZAL”, Mr. Jahangir Askerov.

During the Skytrax audit on the level of services provided to passengers, the condition, design and cleanliness of the aircraft cabin, in-flight entertainment, crew uniforms, attitude towards passengers and work efficiency were inspected. The inspecting officers also did not pass over the duty free service, the information content of inflight magazine, the quality of on-board catering, the comfort of seats, etc.

We also wish to point out that according to the results of the audit held by Skytrax, the Heydar Aliyev International Airport – the base airport of “Azerbaijan Airlines”, was named the best among the world airports with an annual passenger traffic of up to 5 million people in May this year. In terms of service, it was ahead of the leading airports in Europe, the Middle East and the inter-American region.

In addition, according to the Skytrax World Airport Awards, Heydar Aliyev International Airport was recognized as the best among the air harbours of all CIS countries for the fourth year in a row.