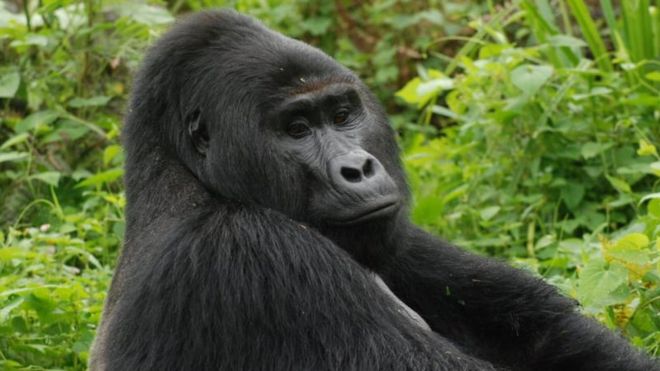 One of Uganda's best known mountain gorillas, Rafiki, has been killed, BBC reported.

Four men have been arrested, who face a life sentence or a fine of $5.4m (£4.3m) if found guilty of killing an endangered species.

Investigations showed that Rafiki was killed by a sharp object that penetrated his internal organs.

There are just over 1,000 mountain gorillas in existence and the Uganda Wildlife Authority (UWA) described Rafiki's death as a "very big blow".

The silverback, believed to be around 25 years old when he died in the Bwindi Impenetrable National Park, was the leader of a group of 17 mountain gorillas.

This group was described as habituated, meaning that its members were used to human contact.

"The death of Rafiki leaves the group unstable and there is the possibility that it could disintegrate," Bashir Hangi from the UWA told the BBC.

"It has no leadership at this time and it could be taken over by a wild silverback."

If that happened, the group would not want to come into contact with humans, which ultimately could affect tourism.

The mountain gorillas are a popular draw for visitors to the country and the UWA relies on the tourists for revenue.

Rafiki himself was very popular with people who had come to the Bwindi Impenetrable National Park, Mr Hangi said.

He went missing on 1 June and his body was discovered by a search party the following day.

A UWA team tracked a suspect to a nearby village, where he was found with hunting equipment.

He admitted that he, and three others, had been hunting smaller animals in the park and that he killed Rafiki in self-defence when he was attacked, the UWA said in a statement.

The four men are expected to be charged under a wildlife protection law that was passed last year.