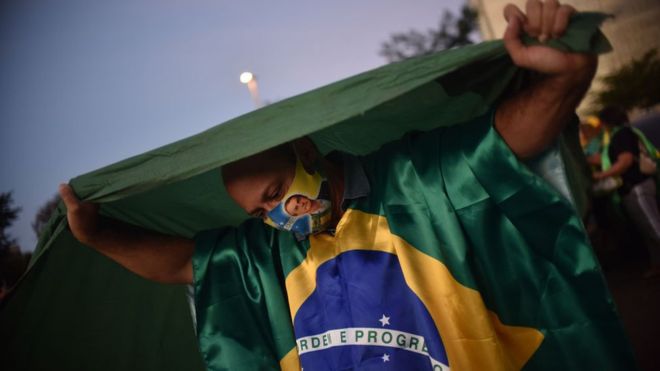 Brazil's handling of the pandemic has turned highly political.

The country has swiftly risen up the grim leader board of coronavirus statistics and its death toll - 41,828 - is now the world's second highest.

The Americas account for around half of the number of cases globally. Brazil, Latin America's biggest country, is now the epicentre of the epicentre.

But its leader still seems to care very little - or at least that is the impression he is happy to portray.

From the outset, President Jair Bolsonaro has played down the virus. Early on in the crisis, he went on TV several times, calling it the little flu and accusing the media of hysteria.

He has not scheduled a television address for a while, perhaps not wanting to be drowned out by the din of pot-banging protesters on their balconies intent on making their anger over his leadership heard.

But in the absence of the public broadcasts, the public display of irreverence continues, even as his people bury their dead in mass graves in the Amazon and hospitals in some parts are verging on collapse.

When questioned about the death toll in April, Mr Bolsonaro brushed it off saying "I'm not a grave-digger". A week or so later, he was asked for a comment when Brazil overtook China's death toll, to which he responded "So what?".