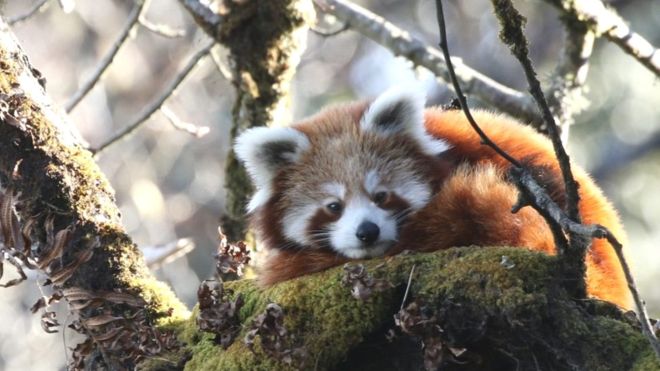 Conservationists are satellite tracking red pandas in the mountains of Nepal to find out more about the factors that are driving them towards extinction.

The mammals are endangered, with numbers down to a few thousand in the eastern Himalayas and southwestern China.

Ten red pandas have been fitted with GPS collars to monitor their range in the forests near Mount Kangchenjunga.

The GPS collars are said to be working well and yielding "exciting data".

"This is a great milestone in red panda conservation", said Man Bahadur Khadka, director general of Nepal's department of forests and soil conservation.

The red panda (Ailurus fulgens) was initially considered a relative of the raccoon because of its ringed tail, and was later thought to be related to bears.

The species is now known to be in a family of its own and one of the most evolutionary distinct and globally endangered mammals in the world.

The loss of the forests that provide shelter and a supply of bamboo for food is a big problem for the red panda.

Conservationists in Nepal hope the study over the course of a year will give valuable data about how to better protect one of the last remaining populations.