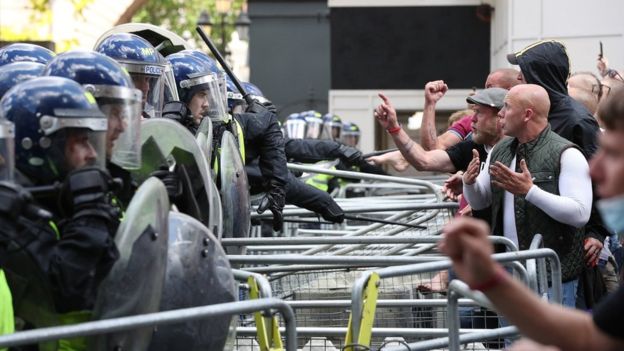 Police have been attacked by demonstrators in central London, where thousands gathered despite warnings to avoid protests.

Groups including some far-right activists congregated in the capital, claiming they were protecting statues from anti-racism activists.

Boris Johnson said "racist thuggery has no place on our streets" after officers were seen being punched and kicked.

Some peaceful anti-racism protests also took place in London and across the UK.

The Met Police had placed restrictions on several groups intending to protest, including having to finish at 17:00 BST, following violent scenes last weekend.

However, pockets of protesters remained on the streets of central London after the official cut-off.

As of 17:00 BST, Scotland Yard said they had arrested five people for offences including violent disorder, assault on police, possession of an offensive weapon, being drunk and disorderly and possession of Class A drugs.

Prime Minister Boris Johnson tweeted: "Racist thuggery has no place on our streets. Anyone attacking the police will be met with full force of the law.

"These marches and protests have been subverted by violence and breach current guidelines. Racism has no part in the UK and we must work together to make that a reality."

A man who was part of the protest was pictured in Parliament Square urinating next to the memorial of PC Keith Palmer - the police officer killed in the Westminster terror attack in 2017.

Home Secretary Priti Patel said the "desecration" of the memorial was "utterly shameful".

Various groups from around the country, including some far-right activists, said they had come to London to protect symbols of British history.

Hundreds of mostly white men gathered around the Cenotaph war memorial in Whitehall and the boarded-up statue of Winston Churchill in Parliament Square.

There were a number of clashes with police in riot gear as crowds - chanting "England" and raising their arms - surged towards lines of officers.

Some protesters managed to break metal barriers around the Cenotaph on Whitehall while hurling flag poles, a smoke flare and a traffic cone towards police who were striking them back with batons.

Large groups of right-wing protesters then moved to Trafalgar Square, where fireworks were thrown across the crowds.

As some protesters moved towards Waterloo Station around 18:00 BST, both the underground and mainline station were temporarily closed due to the protests - but later reopened.

A statement from the London Ambulance Service said it had treated 15 patients, including two police officers, for injuries at the protests.

"Six of these patients - all members of the public - have now been taken to hospital." The ambulance crews remain at the scene.