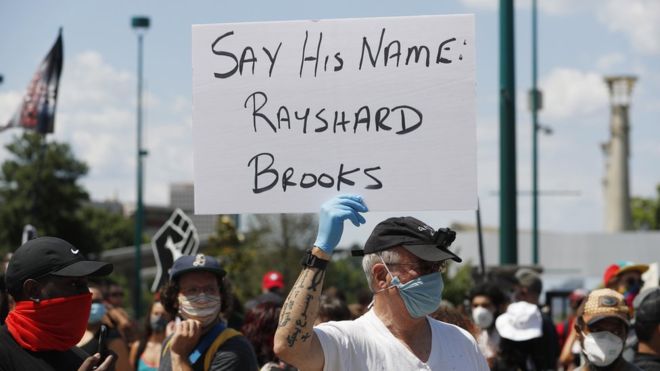 Atlanta's Police Chief has resigned after the fatal shooting of an African-American who had fallen asleep in his car at a drive-through restaurant.

Rayshard Brooks, 27, was shot by a police officer during a struggle on Friday evening, authorities say.

Protesters in Atlanta took to the streets this weekend calling for action following Mr Brooks' death.

On Saturday evening, demonstrators closed down a major highway, Interstate-75, in Atlanta. The Wendy's restaurant outside which Brooks died was also set on fire.

Over the past three weeks, people across the US have already been protesting over the death of George Floyd, an unarmed black man in police custody.

Erika Shields had served as police chief since December 2016 and had worked in the Atlanta police department for more than 20 years. She will continue with the department in another role, Mayor Bottoms said.

"Because of her desire that Atlanta be a model of what meaningful reform should look like across this country Chief Shields has offered to immediately step aside as Police Chief so that the city may move forward with urgency and rebuilding the trust so desperately needed throughout our communities," Mayor Bottoms said in a statement.

Mayor Bottoms has also called for the sacking of the officer involved in Brooks' death.