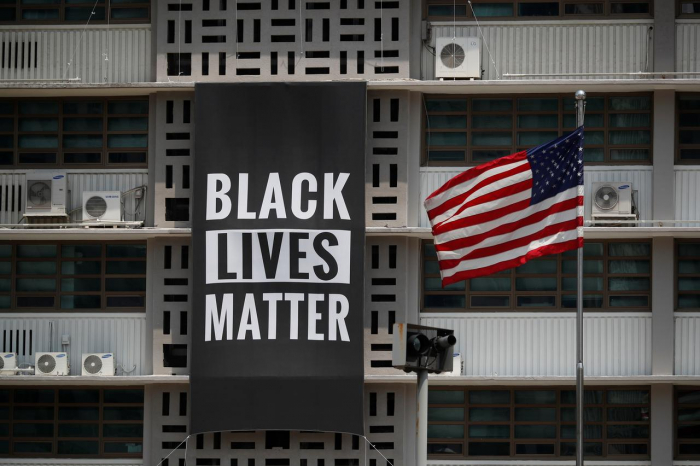 The U.S. embassy in Seoul draped a huge Black Lives Matter banner on its mission building and tweeted a picture of it in support of an anti-racism campaign across America, Reuters reported.

“The U.S. Embassy stands in solidarity with fellow Americans grieving and peacefully protesting to demand positive change. Our #BlackLivesMatter banner shows our support for the fight against racial injustice and police brutality as we strive to be a more inclusive & just society,” the embassy tweeted on Saturday, along with the picture of the banner in black and white.

U.S. Ambassador to South Korea Harry Harris retweeted the message, adding “USA is a free and diverse nation... from that diversity we gain our strength.”

Black Lives Matter protests are being held across the globe as part of campaigns focusing on social injustice following the death of George Floyd in police custody, but the banner is seen as a rare, open support for the protest by an appointee of President Donald Trump after Trump linked violent protests to “thugs.”

No comment was immediately available from the embassy on Sunday.

The embassy also made some waves last year when it displayed a rainbow banner in support of the LGBTQ community.

Harris, a 40-year veteran of the U.S. Navy who started in Seoul in 2018 after Trump appointed him, has privately said that he is planning on exiting his position before the end of the year.