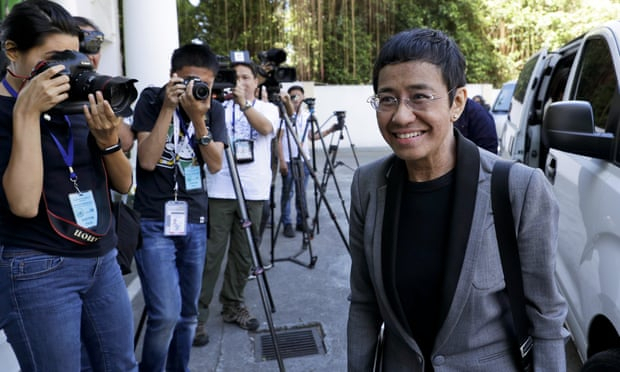 One of the Philippines’ most prominent journalists, Maria Ressa, is facing up to six years in prison after she was found guilty on Monday of “cyber libel” charges, a verdict condemned as setting “an extraordinarily damaging precedent” for press freedoms in the region, the Guardian reports.

The verdict was issued by Judge Rainelda Estacio-Montesa in a Manila court, where just a limited number of attendees were permitted as part of coronavirus prevention measures. Rappler, one of the country’s most influential news websites, its editor, Ressa, and former researcher and writer Reynaldo Santos Jr were accused of cyber libel in 2017.

Rappler was found to have no liability, but both Ressa and Santos were found guilty. They are entitled to post-conviction bail, and can appeal the case in the Supreme Court. They have been ordered to pay P200,000 (US$3978.37) in moral damages and another P200,000 in exemplary damages.

The case, widely seen as an attempt to muzzle the media, followed a complaint by a businessman about a story written five years earlier about his alleged ties to a then-judge in the nation’s top court.

At a press conference after the verdict was announced, Ressa vowed to continue fighting. “Freedom of the press is the foundation of every single right you have as a Filipino citizen. If we can’t hold power to account, we can’t do anything.”

“Are we going to lose freedom of the press? Will it be death by a thousand cuts, or are we going to hold the line so that we protect the rights that are enshrined in our constitution?”

The mission of Rappler, Ressa added, would remain the same. “We’re at the precipice. If we fall over we’re no longer a democracy.”

Amal Clooney, a barrister at Doughty Street Chambers in London, who leads a team of international lawyers representing Ressa, said the court had become “complicit in a sinister action to silence a journalist for exposing corruption and abuse”.

“This conviction is an affront to the rule of law, a stark warning to the press, and a blow to democracy in the Philippines. I hope that the appeals court will set the record straight in this case.”

She added that she hoped the US would take action to protect Ressa, who holds both Philippine and American nationality.

The cyber libel case is just one of a series of legal charges against Ressa and Rappler, which has scrutinised the administration of President Rodrigo Duterte, exposing extrajudicial killings and abuses. The various allegations made against Ressa, which mostly relate to claims about the news site’s finances, could lead to about 100 years in prison.

The arrest of Ressa in February 2019 on cyber libel charges was widely condemned by human rights groups, and prompted the United Nations high commissioner for human rights to warn that there appeared to be “a pattern of intimidation” of independent media in the Philippines. The US senate described the charges as “unjustified judicial proceedings”.

The National Union of Journalists of the Philippines said the verdict “basically kills freedom of speech and of the press. But we will not be cowed. We will continue to stand our ground against all attempts to suppress our freedoms.”

Duterte has denied the case is politically motivated and has dismissed Rappler as fake news.

The site has uncovered corruption and bot armies, and documented the brutal anti-drugs campaign waged under Duterte, which the UN recently warned had led to “widespread and systematic” extrajudicial killings. Government figures indicate at least 8,663 people have been killed in the crackdown; other estimates put the toll at triple that number.

The cyber libel charge relates to a story published on the website in May 2012 that alleged ties between a Philippine businessman, Wilfredo D Keng, and a high court judge.

The case was first brought in 2017, and initially dismissed by the National Bureau of Investigation because it was outside the statute of limitations. But in 2018 the justice department allowed the case to proceed to trial, extending the liability period for such cases from one to 12 years.

Ressa and her legal counsel point out that the controversial cyber-libel law did not exist at the time of publication, and was in fact only enacted four months after the story was written. However, the justice department allowed the case to go ahead because the online article had been updated in February 2014 to correct a spelling error.

In addition to Monday’s case, Ressa also faces another libel prosecution, two criminal cases alleging illegal foreign ownership in her companies, and investigations into her old tax returns, which Gallagher described as spurious. At one stage, Rappler’s operating licence was also revoked.

Caoilfhionn Gallagher, a barrister at Doughty Street Chambers in London, who leads Ressa’s international team alongside Clooney, drew between the harrassment of Ressa and the intimidation faced by the the Maltese investigation journalist Daphne Caruana Galizia prior to her murdered in 2017. “Rappler has even been vilified in presidential press conferences and Maria herself has received horrific misogynistic rape and death threats online simply for doing her job,” she said.

Media freedom in the Philippines has deteriorated severely under Duterte, who stated in 2016: “Just because you’re a journalist, you are not exempted from assassination”. The country now ranks 136th out of 180 countries on the Reporters Without Borders (RSF) World Press Freedom Index. Journalists have been targeted through judicial harassment, online campaigns waged by pro-Duterte troll armies, and violence. Local politicians, it warned, “can have reporters silenced with complete impunity”.

Just last month, the country’s biggest broadcaster, ABS-CBN, was forced off air by a cease-and-desist order that was condemned as a brazen attempt to silence the press. Meanwhile a new anti-terrorism act has been recently passed by lawmakers, allowing warrantless arrests, weeks of detention without charge and other powers that rights groups fear could be used against government critics.