With dozens of new cases, a section of Beijing is locked down 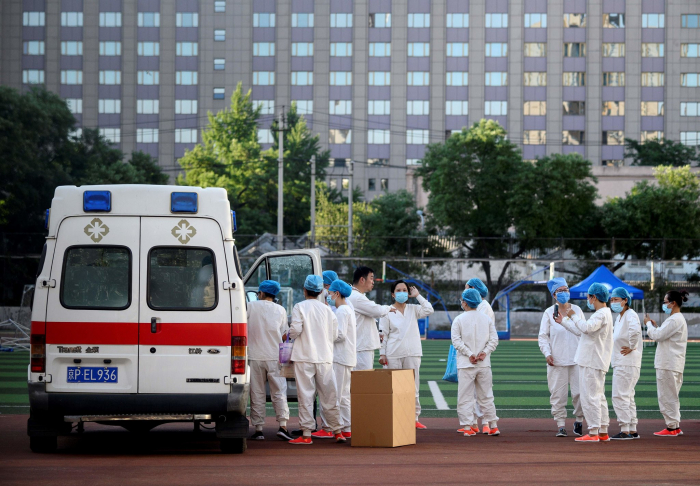 A section of Beijing was locked down on Monday as the government rushed to contain a new outbreak of coronavirus infections — an unnerving breach in the capital, which President Xi Jinping had said should be a fortress against the pandemic.

City officials said they had tracked down 79 infections in Beijing over the previous four days, including 36 confirmed on Sunday. All appeared ultimately traceable to the vast, bustling Xinfadi food market in the south of Beijing.

While a few dozen new cases seems slight compared to the hundreds or thousands of infections reported daily by other countries, the new outbreak has jolted China, which had appeared to have largely stifled the virus after it emerged late last year from Wuhan, a city in the country’s center.

“We feel this is dangerous,” Chen Xiaoyan, who owns a shop near the market, said by telephone. He said he was waiting for the results of a test to check if he had the virus. “It is a worry, everyone’s worries. This is no ordinary disease. We’re waiting at home and can’t go out.”

Some Chinese disease control experts had said Beijing appeared to respond to the outbreak quickly. Even so, this failure in the capital’s defenses appeared to rile Mr. Xi’s subordinates. Two local officials and the general manager of the Xinfadi market were dismissed on Sunday for what the city leadership said was a failure to move quickly enough against the infections.

“The market is densely packed with many moving around, and the risks are high that the outbreak will spread,” Sun Chunlan, a vice premier overseeing health policy, said at a meeting on Sunday, according to Xinhua, an official news agency. “Take firm and decisive measures to thoroughly prevent its spread.”

Until the infections from the market began to emerge on Thursday, Beijing had gone 56 days without new, locally borne cases. Its main worry appeared to be Chinese people returning from abroad with the virus.