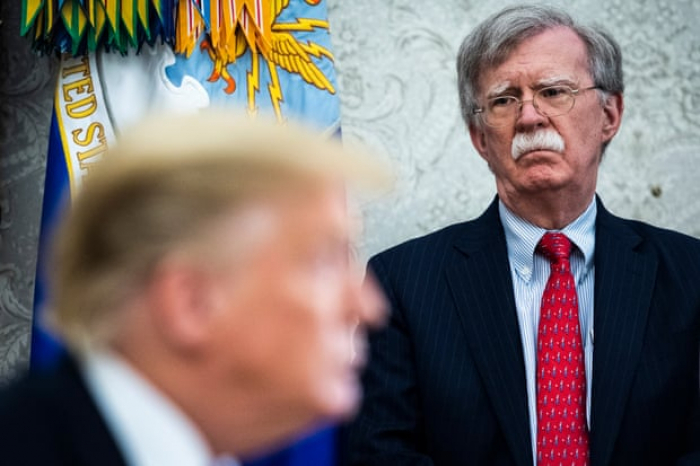 Donald Trump is set to sue to stop the publication of a tell-all book by John Bolton, his third national security adviser, ABC News reported on Monday.

At an event in the White House later in the day, Trump said it would be up to the attorney general, William Barr, to issue any charges, but he hinted that the matter would end up in court. “We’ll see what happens. They’re in court or they’ll soon be in court,” Trump said about the book.

Trump accused Bolton of not completing a pre-publication review to make sure the book does not contain classified material. That contradicts statements from Bolton’s attorney, Chuck Cooper, who says his client worked painstakingly for months with classification specialists at the White House National Security Council to make changes to avoid releasing classified material.

Barr echoed Trump’s accusation. The attorney general said administration officials who have access to sensitive information typically sign non-disclosure agreements that require them to go through a clearance process before they can publish something based on information they accessed in the job.

“We don’t believe that Bolton went through that process, hasn’t completed the process, and, therefore, is in violation of that agreement,” Barr said. The Trump administration is “trying to get them to complete the process – go through the process – and make the necessary deletions of classified information,” he added.

The Room Where It Happened was initially scheduled for publication earlier this year but was delayed when the White House said it contained classified information.

Last week, publisher Simon & Schuster announced the 23 June release of “the book Donald Trump doesn’t want you to read”. Bolton has already recorded an interview with the ABC anchor Martha Raddatz, which is due to be broadcast on Sunday night.

Bolton, a former ambassador to the United Nations, was national security adviser between April 2018 and September 2019. Controversially, Bolton did not testify in impeachment proceedings against Trump which focused on Ukraine and Trump’s attempts to bully the government there to investigate his political rival Joe Biden. Trump was acquitted by the Republican-controlled Senate in February.

“What Bolton saw astonished him,” his publisher said. “A president for whom getting re-elected was the only thing that mattered, even if it meant endangering or weakening the nation.

“Bolton argues that the House committed impeachment malpractice by keeping their prosecution focused narrowly on Ukraine when Trump’s Ukraine-like transgressions existed across the full range of his foreign policy – and Bolton documents exactly what those were, and attempts by him and others in the administration to raise alarms about them.”

When news of Bolton’s book plans first broke, Trump reportedly called him a “traitor” and said he wanted to sue to stop publication.

It is not clear the current threat will work. In January 2018, Trump threatened to sue to stop the publication of Fire and Fury, a book by Michael Wolff, after the Guardian broke news of its sensational content. Publisher Henry Holt responded by rushing the book to the public.

Bolton’s lawyer, Chuck Cooper, wrote in the Wall Street Journal last week of “a transparent attempt to use national security as a pretext to censor Mr Bolton, in violation of his constitutional right to speak on matters of the utmost public import.

“This attempt will not succeed, and Mr Bolton’s book will be published [on] 23 June.”

His predecessor as national security adviser, HR McMaster, has a book due out in September.

Trump books have become big business. On Sunday night, the Daily Beast reported that the president’s niece, Mary Trump, will publish one in August. It is expected to contain revelations about Trump family relationships and its tax affairs.