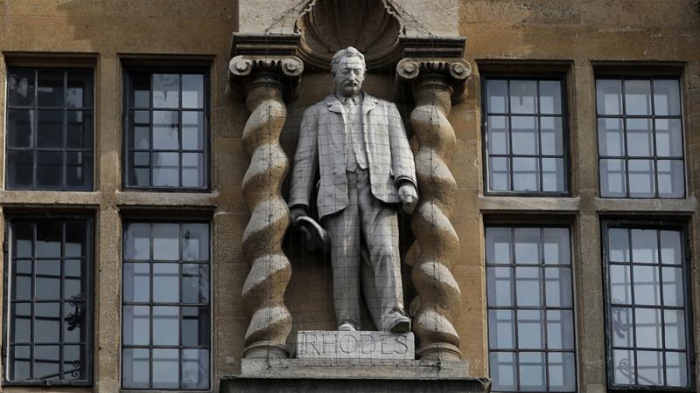 Oxford University’s Oriel College has voted in favour of removing its statue of the Victorian imperialist Cecil Rhodes and will set up an independent inquiry into the key issues around it following a student-led campaign that began four years ago, the Guardian reports.

The governing body of Oriel College meeting follows protests by the Rhodes Must Fall campaign outside the college over the past two weeks. The campaign, which started in 2015 but dwindled after students graduated, was reignited by the recent Black Lives Matter demonstrations across the UK, which included the dramatic toppling of a statue of the slave trader Edward Colston in Bristol.

Oriel College voted on Wednesday to launch an independent commission of inquiry into the key issues surrounding the Rhodes statue. A spokesperson said in a statement that they had “expressed their wish to remove the statue of Cecil Rhodes … This is what they intend to convey to the independent commission.”

The statement continued: “Both of these decisions were reached after a thoughtful period of debate and reflection and with the full awareness of the impact these decisions are likely to have in Britain and around the world.

“The commission will deal with the issue of the Rhodes legacy and how to improve access and attendance of BAME [black, Asian and minority ethnic] undergraduate, graduate students and faculty, together with a review of how the college’s 21st century commitment to diversity can sit more easily with its past.”

The governing body appointed Carole Souter CBE, the current master of St Cross College and former chief executive of the National Lottery Heritage Fund, to be the chair of the commission.

Inspired by student activism in South Africa, hundreds of Oxford students campaigned for the removal of the likeness of Rhodes, who supported apartheid-style measures in southern Africa, from the facade of the college in 2016. The campaign also called for the university curriculum to be changed to reflect diversity of thought beyond the western canon and for better support for BAME student and staff.

A spokesperson for the campaign said they were cautiously optimistic after the announcement. “We have been down this route before, where Oriel College has committed to taking a certain action, but has not followed through: notably, in 2015, when the college committed to engaging in a six-month-long democratic listening exercise. Therefore, while we remain hopeful, our optimism is cautious. While the governing body of Oriel College have ‘expressed their wish’ to take down the statue, we continue to demand their commitment.”

Simukai Chigudu, an associate professor of African politics at the University of Oxford and founding member of the Rhodes Must Fall campaign, said: “This statement bears some resemblance to the first statement they issued in 2016, but it includes the crucial, additional detail that the governing body itself has voted for the statue to be removed. I think that’s a substantial shift in their position.”

He added: “But it does leave room for ambiguity. This is not a definitive victory, it’s a sign of progress in the right direction. I think this is a paradigm shift, I think that the amount of pressure on Oriel College from different constituency has been a lot greater this time. I think there’s been more time to marinate in the wider anti-racist, anti-colonial arguments that underpin Rhodes Must Fall thinking. I think all of those things have fed into the discussion that has taken place.”

Layla Moran, Liberal Democrat leadership candidate and Oxford West MP, said it was “the right decision” and called for the statue to be put in a museum where it can help inform people about Britain’s past. She added: “I hope this represents a true turning point and that other institutions will follow Oriel’s lead and take down statues of slave traders and white supremacists.”

Gildea said: “Oriel is to be congratulated on making this first decision to take down this statue, so that we no longer have to pay homage to a century-old symbol of colonialism and white supremacy … This is a historic moment to be savoured.”

Three Oxford college heads, Valerie Amos, the incoming master of University College, Roger Goodman, warden of St Antony’s College, and Kate Tunstall, provost of Worcester College, had all come out in support of the campaign in the past week. The graduate student body of Oriel College also voted this week in favour of removing the statue.

Michelle Donelan, the universities minister, described the campaign to remove the controversial statue of Cecil Rhodes from an Oxford college as “short-sighted”. She said we should “remember and learn” from history rather than “edit” the past.

In 2016, Oriel said the statue would stay, with modifications that “draw attention to this history [and] do justice to the complexity of the debate”. It had been warned that it could lose about £100m in gifts should the statue be taken down, but it insisted financial implications were not the primary motive behind its decision.

The announcement came after another day of mounting pressure on the university authorities. Earlier, black and minority ethnic staff voiced their support for both the Rhodes Must Fall and Black Lives Matter campaigns, telling the vice-chancellor, Louise Richardson, of their concern about “inadequate messages about countering institutional racism” from the university.

A letter from the BME staff network said it “stands in solidarity with the global Black Lives Matter protests, as well as with the Rhodes Must Fall Movement at the University of Oxford … As these movements have shown, [BAME] staff and students are heavily underrepresented in UK higher education and face institutional racism in many forms.”

The group said it wanted the university to acknowledge and support its BAME staff after the trauma and protests that have followed the killing of George Floyd. “This would entail recognition that the university is also complicit in racism, and indeed that while our work as [BAME] staff is foregrounded as proof of diversity, there are few mechanisms of support provided within the institution in solidarity against racism,” the letter states.

The letter was published a week after members of the university’s African and Caribbean society said they were so disillusioned by Oxford’s failure to tackle racism that they no longer work on its outreach programmes to attract other black students.

A spokesperson for Oxford said the university had received the letter and would be giving a full reply. “The university has acknowledged that it has, as Britain does, a history that is marked by colonialism and imperialism. Although we cannot change this fact, we must continue to create a genuinely diverse and inclusive academic community in which students and staff feel respected and secure.

“We are committed to addressing systemic racism wherever it may be found, including within our own community,” the spokesperson said.