What outdoor space tells us about inequality 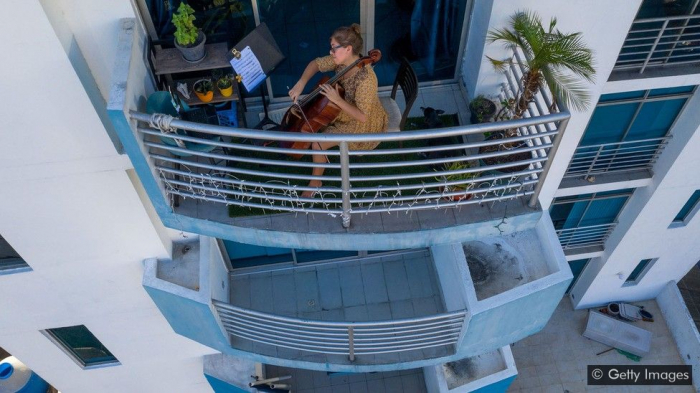 Whether it's a small balcony, a home garden, or access to a park, outdoor space has long been a luxury for many – not a given. And the pandemic's made it even worse

Moikgantsi Kgama has seen far too much of her apartment recently. She’s spent the pandemic inside her home in New York’s Harlem neighbourhood, an affordable housing flat which has no balcony, rooftop or private garden. A communications consultant by day and CEO of her own film company on the side, she spends her time working in a tiny home office alongside her husband, who lost his job in the concert industry when coronavirus hit. They’re also home-schooling their son, who’s developed insomnia due to the abrupt lifestyle change. Having no outdoor space makes everything worse.

“I don’t have anywhere to go, except outside into the pandemic – which feels extremely scary,” says Kgama.

Studies have long shown that access to green or open space is often linked to income, particularly in cities. Covid-19 has placed this issue front and centre: those with access to balconies, gardens or good, close neighbourhood parks have been benefiting from them during weeks of lockdown, while others have been trapped inside. Kgama says that she could walk to a park, but that would mean making her way through crowds of people gathered on the pavement to throw birthday parties. “You only see that in poor neighbourhoods,” she says. “People haven’t stopped doing that during the pandemic. I walked through one yesterday.”

Lacking that private outdoor space is something that “defines the haves and have-nots”, she feels. And there’s no guarantee living outside the city is better; poverty is rising in US suburbs and residents of emerging suburbs have some of the lowest park access in the nation.

Covid-19 has shone a harsh light on numerous inequalities in our society. Is access to green space one we can fix?

Decades of research have shown that spending time in green space is good for our physical and mental health – including boosting our emotional states and attention spans and improving our longevity. Even a little goes a long way: a study in the 1980s showed that post-surgery patients assigned to hospital rooms with greenery outside recovered faster than those who didn’t have such accommodations.

Yet in many cities, outdoor space – whether your own or in terms of proximity to parks – comes at a premium. Last month, a study from the Office of National Statistics revealed that one in eight British households had no access to green space at home, whether a private or shared space. That inequity was starker among ethnic groups: in England, black people are almost four times more likely than white people to have no access to private outdoor space. Access to public outdoor space can be a challenge, too: “There are about 100 million people in the US who don’t live within 10 minutes of a park or green space,” says Kimberly Burrowes, a researcher at the Urban Institute, a think tank based in Washington, DC that studies cities. And the poorer an area is, the worse the park quality, even if a park is close by.

“People view nature as an amenity, not as an essential,” says Lorien Nesbitt, an assistant professor of urban forestry at the University of British Columbia in Canada. “I think we don’t always view urban nature as important as running water, housing, that kind of thing.” Nesbitt led a study last year examining green space in 10 major US cities. Across the board, she says, green space was harder to access in lower-income neighbourhoods and in areas with mostly residents of colour. In general, in richer areas, it’s easier to find any kind of garden, rooftop or balcony greenery, ‘micro parks’ on pavements or city blocks, and even trees, which require long-term investment and maintenance, meaning they are found more often in those wealthier neighbourhoods.

Moving further out of cities is a solution many seek. Yet, cheaper suburban life, with its houses and front and back gardens, isn’t always the solution. In some areas people (especially women and people of colour) may not feel safe in their gardens, or homes might be next to loud, pollution-heavy structures like a highway or airport. Not all suburbs are created equal, either: from 2000 to 2015, the poverty rate in US suburbs grew by 57%. “There are still marginalised people in suburban areas as well,” says Nesbitt. “It’s not so much about the amount [of green space], it’s the quality.”

In a place like the US, public green spaces are funded by city budgets (whose parks departments can often operate on a shoestring) from local tax dollars. In richer areas, green spaces can be high quality, since private non-profits can “conduct massive fundraising campaigns among the affluent stakeholders with access to these parks”, says Ingrid Gould Ellen, faculty cirector of New York University’s Furman Center, which researches urban policy. “Since state and local budgets seem likely to shrink [because of the pandemic], potentially dramatically, there's a worthwhile conversation about how to raise private funds to support investment in parks in lower-income neighbourhoods.”

Some cities have prioritised accessible green space more than others; in Vancouver, 92% of residents live within a five-minute walk of green spaces. In Milwaukee, in the US state of Wisconsin, Burrowes points to an urban trail that was deliberately designed to makes its way through several neighbourhoods of colour, allowing residents greater access close to home. She says cities like these have nature-minded advocates in local government: she points to the 10-Minute Walk Challenge, which challenges mayors to make parks a 10-minute walk from all homes by 2050. It’s a national initiative led by organisations like the US’s National Recreation and Park Association, and nearly 300 city mayors have signed on, with San Francisco becoming the first city to hit the challenge’s goal in 2017.

Burrowes also points to New York City’s work with minority communities in Manhattan’s Lower East Side decades ago to create ‘pocket parks’ tucked into the city blocks that exist to this day. Even when the city was gripped by crime, drugs and bankruptcy in the 1970s, it helped neighbourhood residents develop the public community gardens they made out of abandoned clearings that continue to provide green space for small public art events and other gatherings.

Then there’s the matter of balconies. “I live in affordable housing, and I’m grateful for the housing,” says Kgama. “But I was kind of thinking, ‘would it have hurt them to put a balcony here?’” She isn’t alone in that sentiment: from New York to Toronto, there’s been more demand for balconies built into apartment units. Strict zoning laws and extra cost are roadblocks, however, as is the fact that bigger balconies can mean less space inside.

“Balconies and communal rooftops were not common features of pre-war construction, and 57% of all units in New York City were built before 1947,” says New York University’s Ellen, who says small courtyards are more common, and many public housing buildings were built to include them. But many, like Kgama’s, don’t allow residents access, as that would require extra maintenance money.

Some local architecture firms, like New York City-based PRO, think now is the time to address this issue, with proposals to retrofit screened-in balconies onto the sides of World War Two-era brick buildings. Nathan Rich, the founding partner at PRO, points to a project in France that’s done something similar, adding balconies on to 1960s social housing developments. His firm is looking at buildings within the New York City Housing Authority (NYCHA), which provides housing to low and middle-income residents, to design possible solutions.

Most NYCHA buildings lack outdoor space, plus many of the buildings are ageing rapidly, with potentially huge maintenance costs – meaning any solutions need to be creative. “We are looking at strategies that would allow new balconies to perform multiple functions and piggyback on NYCHA maintenance efforts that are already underway,” says Rich.

Nesbitt says changes don’t have to be so radical; even “view corridors” to parks from your home could help. Extra flowers on the street could work, too, because we can’t go to the park every day. “Especially if we’re busy, or a single parent, or low income and we have to work a couple [of] jobs. You’re not going to be in the park five blocks from your house – you will be walking down the street in front of your house, and that contact with nature is important.”

Of course, trying to increase access to outdoor space has been a goal of cities way before Covid-19 struck. But the conversation has taken on greater intensity since the pandemic has exposed just how unequal access can be. It’s not yet been possible to quantify the mental-health toll of long weeks of lockdown, and any correlation with access to outdoor space. But we do know that isolation is bad for everyone’s mental health, and that people who lost incomes or had low incomes to begin with experienced more stress. “Covid continues to spotlight where these inequities are and what they look like,” says Burrowes.

Experts hope this will accelerate pre-pandemic trends: a push for more balconies, better community gardens and easier entry points to parks. But this must come from city governments prioritising them. “We can have good housing and good access to nature – not one or the other,” says Nesbitt. “In the pandemic, that relationship with nature is really important.”

Kgama, meanwhile, is finally managing to get some fresh air – in Charlotte, North Carolina. She and her family bought plane tickets for $15 each and will fly down for a weeklong getaway. But she wishes it was even longer. If a second wave of Covid cases hits New York, it’ll mean being cooped up inside for months all over again. “If I could, we would’ve left for the whole summer,” she says.