FBI use social media to charge Philadelphia protester with arson 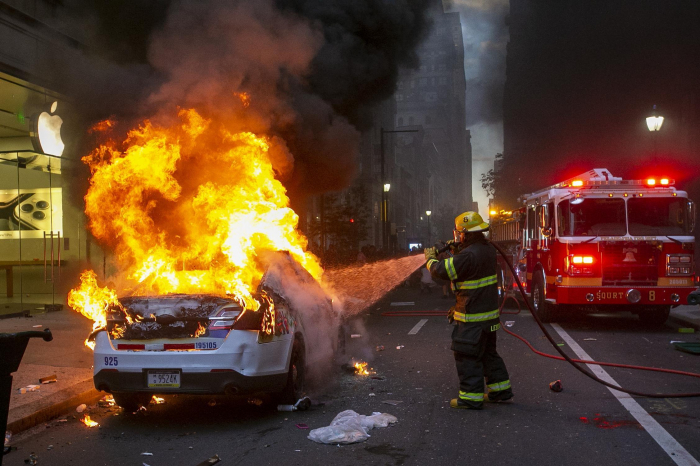 A woman who allegedly set fire to two police cars during protests in Philadelphia was tracked down by the FBI using information from social media including Etsy, Instagram, and LinkedIn, reports have said.

Prosecutors announced on Wednesday that Lore-Elisabeth Blumenthal had been charged with arson for allegedly setting two police cars alight amid George Floyd protests on 30 May.

It only took a matter of days for investigators to track the woman down, according to a report by Vice, by using a number of open-source information to identify her and subsequently make an arrest.

A criminal complaint against the 33-year-old detailed that investigators tracked her down through social media, videos of the protests alongside her T-shirt and tattoos, according to a report by NBC affiliate WCAU.

“We at the US Attorney’s Office fully support the First Amendment right of the people to assemble peaceably and to petition their government. But torching a police car has nothing to do with peaceful protest or any legitimate message”, US Attorney William McSwain said in a press release.

Vice reported that an affidavit, signed by one of the agents involved in the case, detailed how agents first identified the woman by watching aerial footage of the protests on the news and a video posted to Vimeo.

The agent claimed they were able to distinguish that the woman involved was wearing a “Keep the immigrants, deport the racists” T-shirt after obtaining amateur photographs and a photo from Instagram of the protests, reports said.

The FBI then reportedly tracked the slogan T-shirt to a seller on Etsy where they identified that a user located in Philadelphia had left a review of the product. The affidavit also said that investigators noticed a “peace” sign tattoo on the woman's forearm in some of the images.

Reports said that investigators searched the username of the Etsy reviewer online and came across the username “lore-elisabeth.”

After searching for “Lore Elisabeth Philadelphia” agents reportedly found a LinkedIn page for a woman who worked as a massage therapist for a company in Philadelphia and cross-referenced videos on their website with the tattoo they had previously identified.

The FBI also obtained a phone number for Ms Blumenthal from the website which was then cross-checked with the Pennsylvania DMV to find a photo of the 33-year-old and her address, according to the court document.

A subpoena provided by the Etsy seller was also said to have confirmed that the user that the T-shirt was shipped to Ms Blumenthal’s address, reports said.

Ms Blumenthal’s lawyer told Vice he was concerned about prosecutors charging her in a federal court, rather than being dealt with by local authorities as with other similar cases regarding the protests in Philadelphia.

“The techniques utilised by the FBI are gonna be scrutinised during the course of my pre-trial investigation of this case,” he said, declining to comment further on the case.

Mr McSwain warned against protesters participating in violent acts while demonstrating, insisting that they would be prosecuted to the “fullest extent of the law.”

“Anybody who engaged in such acts can stand by to put your hands behind your back and head to federal prison. We are coming for you”, Mr McSwain said.

The FBI, as well as the Department of Justice, declined to comment on the case when contacted by Vice.

“FBI investigations are adapting with the changing times as people increasingly put themselves out there online in ways they don’t fully appreciate at the moment or even remember later on. You pull one thread in the morning and you got it figured out by lunchtime,” Seamus Hughes, the Deputy Director of the Program on Extremism at George Washington University, told the outlet.

“Cameras are everywhere, whether it’s protestors’ iPhones, news organisations covering the crowds, or the surrounding buildings’ CCTVs. If you set two cop cars on fire, they’ll eventually find you, it’s just a question of how quickly.”

Many demonstrators have urged protesters to remain as anonymous as possible by wearing black and plain clothing and keeping distinguishable markings covered. Many protesters have also advised participants not to publish footage or images of the protests online in permanent form.

Ms Blumenthal is currently being held in federal custody and had her initial appearance in federal court on Tuesday.