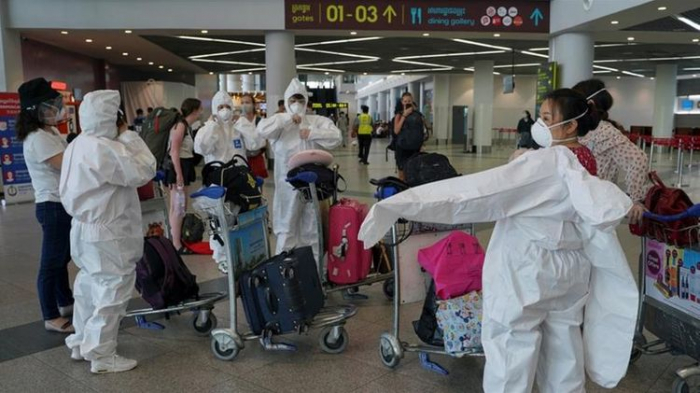 Coronavirus is continuing its spread across the world, with more than 8.8 million confirmed cases in 188 countries. More than 460,000 people have lost their lives.

This series of maps and charts tracks the global outbreak of the virus.

Where are coronavirus cases and deaths still rising?

While some countries are starting to see confirmed cases and deaths fall following strict lockdown restrictions, others are still seeing figures rise.

A sharp increase in cases in Latin America in the second half of May led the World Health Organization (WHO) to say the Americas were the new centre of the pandemic. But there have also been new spikes in Africa, Asia and the Middle East.

These charts show four countries - Brazil, Mexico, India and Pakistan - where cases (in blue) and deaths (in red) have been on an upward trajectory, as shown by the blue and red lines. 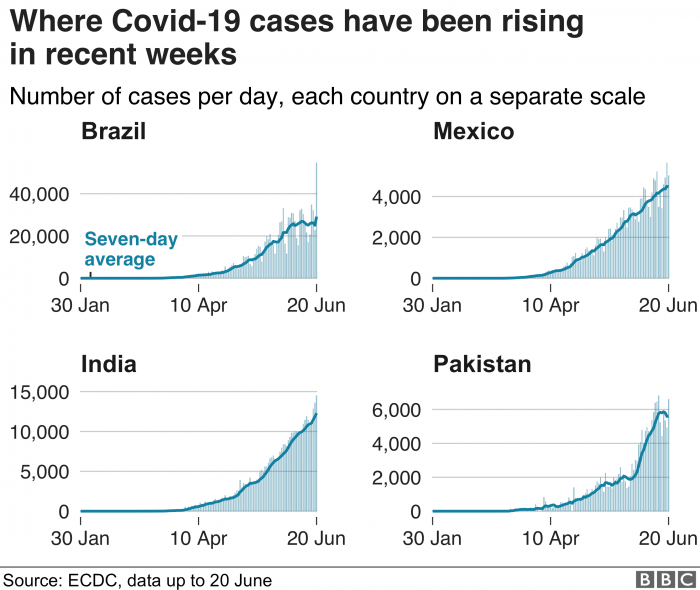 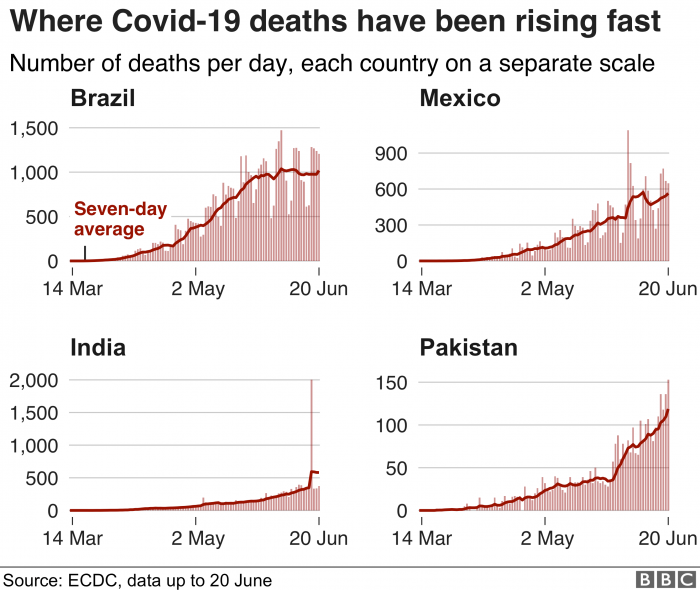 Brazil, Peru, Chile, Mexico and Ecuador are among the Latin America countries that have seen widespread outbreaks.

On Saturday, Brazil became the second country in the world, after the US, to confirm more than one million cases of Covid-19.

President Jair Bolsonaro has consistently downplayed the risks of the virus and prioritised the economy in his decision-making.

In the Mexican capital, a planned reopening of businesses was delayed by a week, as cases continued to surge nationwide.

On Sunday, India reported 15,413 new coronavirus cases - the biggest daily increase since the start of its epidemic, as the country struggles with rising infections. Sunday's record daily increase brings the total number of cases in India to 410,461, the fourth highest in the world after Russia, Brazil and the US.

A further 306 deaths were also reported nationwide, taking the total tally to 13,254. The true number of cases and deaths is thought to be much higher, owing to insufficient testing and reporting issues.

Neighbouring Pakistan has also seen its number of infections and deaths rise in recent weeks and the healthcare systems in both countries are under strain.

In Iran, there are fears of a second wave of infections. The number of daily deaths has risen to around 100 per day for the first time in two months.

China is also dealing with dozens of new cases believed to be connected to a Beijing wholesale market, and has imposed lockdown measures on several neighbourhoods. Chinese officials say the virus currently being detected in Beijing is a "European strain".

South Africa and Egypt have seen the largest outbreaks so far in Africa. But testing rates are reported to be extremely low in some parts of the continent so this could be distorting understanding of how far the virus has spread.

How many cases and deaths have there been?

The virus, which causes the respiratory infection Covid-19, was first detected in the city of Wuhan, China, in late 2019.

It then spread quickly across the globe in the first months of 2020. 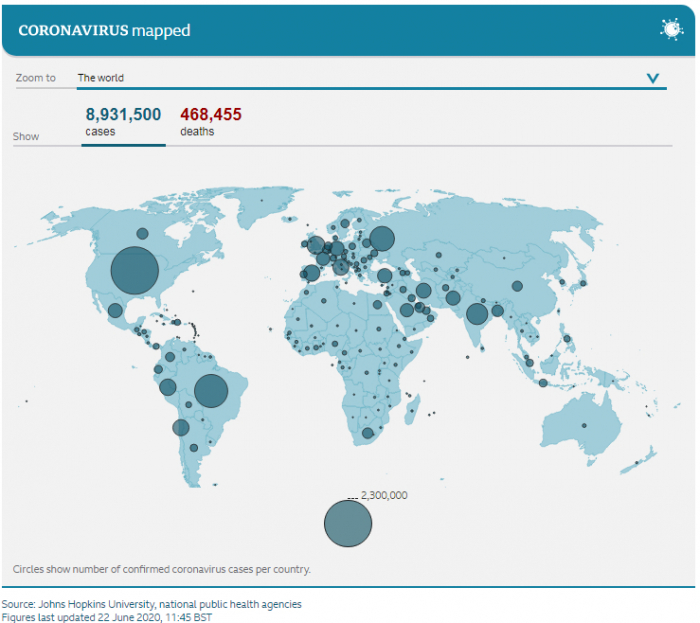 Note: The map, table and animated bar chart in this page use a different source for figures for France from that used by Johns Hopkins University, which results in a slightly lower overall total. US figures do not include Puerto Rico, Guam or the US Virgin Islands.

The US has by far the largest number of cases - now more than 2.2 million and around 25% of the global total - according to figures collated by Johns Hopkins University. It also has the world's highest death toll, followed by Brazil and the UK.

In China, the official death toll is some 4,600 from about 84,000 confirmed cases, although critics have questioned whether the country's official numbers can be trusted.

Globally, the true number of cases is thought to be much higher than the reported figures, as many of those with milder symptoms have not been tested and counted. 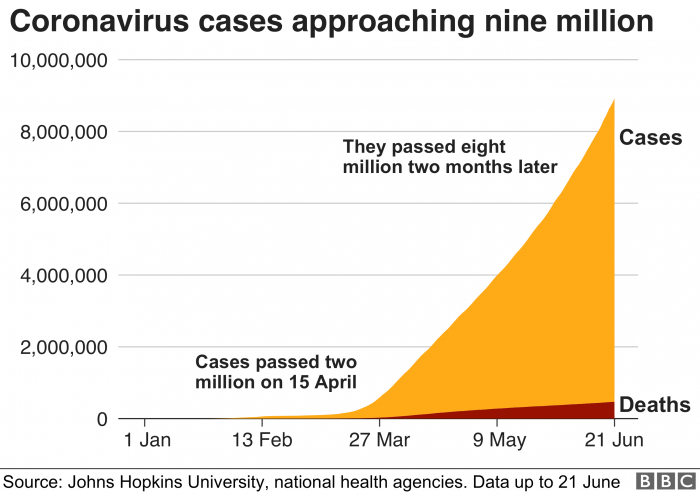 In the table below, countries can be reordered by deaths, death rate and total cases. In the coloured bars on the right-hand side, countries in which cases have risen to more than 5,000 per day are those with black bars on the relevant date.

The outbreak was declared a global pandemic by the WHO on 11 March. This is when an infectious disease is passing easily from person to person in many parts of the world at the same time.

The WHO has warned that the pandemic is a long way from being over and says people should be prepared for new outbreaks, especially in areas where lockdowns are eased.

Globally, at least 4.5 billion people - half the world's population - were living under social distancing measures at the height of the pandemic in Europe, according to the AFP news agency's estimates.

Those restrictions have had a big impact on the global economy, with the International Monetary Fund warning the world faces the worst recession since the Great Depression of the 1930s.

The United Nations World Food Programme has also warned that the pandemic could almost double the number of people suffering acute hunger.

In Europe, the UK, Italy, Spain and France, along with others, now appear to have passed the peak, with the number of new confirmed cases and deaths falling.

The UK has reported more than 42,000 coronavirus deaths, the highest number in Europe. Italy has the second highest death toll with about 34,000, while both France and Spain are just below 30,000.

However, differences in population size and how countries report their figures, with some including deaths in care homes, or deaths of those suspected but not confirmed of having the virus, means international comparisons are complicated. 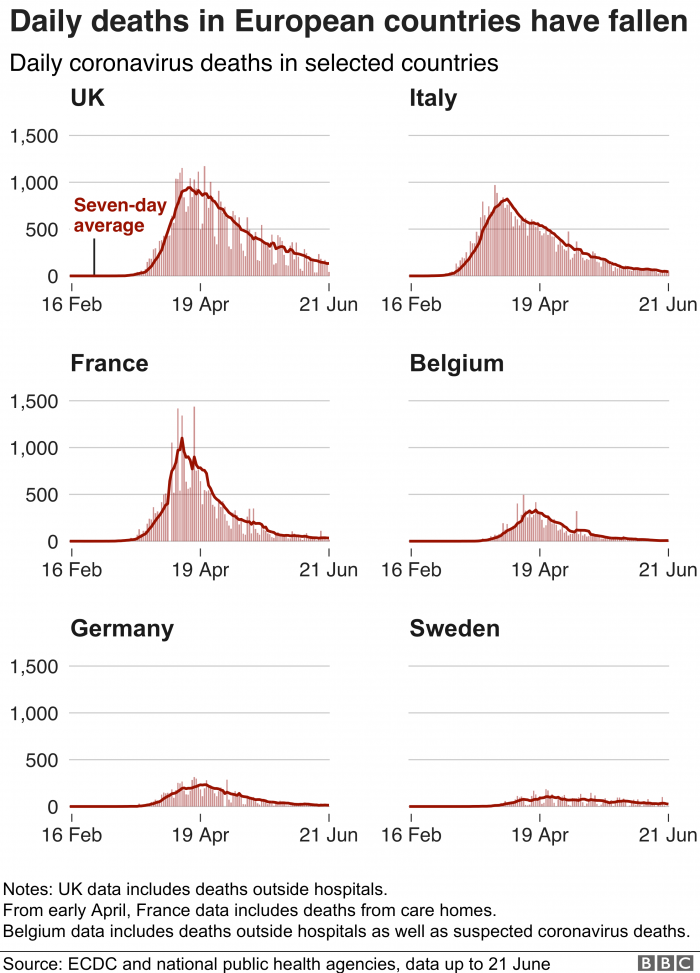 Having been on lockdown to control the spread of the virus, European countries are now beginning to ease restrictions.

How and when restrictions are lifted varies from country to country, but the WHO has urged all nations to adopt a "slow, steady" approach.

The risk of a second wave of infections requiring European countries to re-impose full lockdowns is moderate to high, according to the EU agency that monitors infectious diseases.

New York the worst-hit in US outbreak

With more than 2.2 million cases, the US has the highest number of confirmed infections in the world. It has also recorded nearly 120,000 deaths.

The state of New York has been particularly badly affected, with more than 31,000 deaths in total, but the number of daily deaths has remained below 100 since late May - down from 1,000 a day in early April. 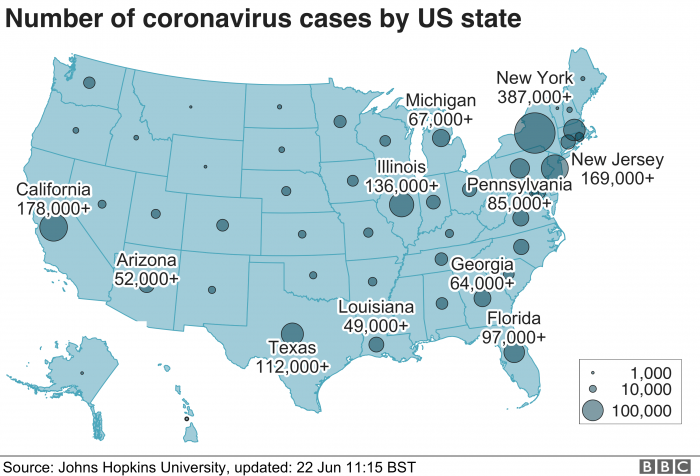 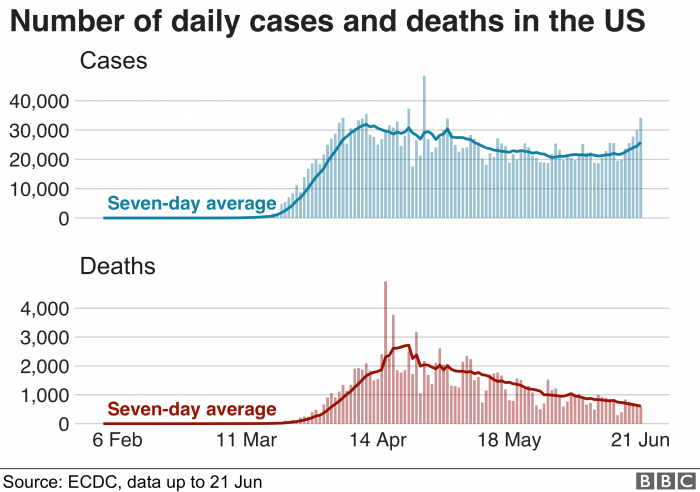 At one point, more than 90% of the US population was under mandatory lockdown orders, but most states have now loosened their stay-at-home restrictions and allowed some businesses to reopen - a move health officials fear could further spread the virus.

Nationally, the number of new cases has remained steady at around 20,000 a day for several weeks, but the situation is not the same in every state.

President Trump and Vice President Pence have cast the increases as largely a product of an uptick in US testing capacity.

But infectious disease expert Dr Anthony Fauci has warned that higher percentages of positive tests in some states "cannot be explained by increased testing."

On Saturday, President Trump held his first campaign rally since the US coronavirus lockdown began, after a lawsuit to stop the event over concerns that it could increase the spread of Covid-19 was rejected. Those attending the rally had to sign a waiver protecting the Trump campaign from responsibility for any illness.

US government figures published on Thursday showed more than 29 million people - nearly one in five American workers - continued to collect jobless benefits as of 30 May.

The economic downturn in the US has been officially declared a recession.