Today marks the first day of Apple’s  Worldwide Developer Conference (or WWDC, as it’s known.) With the pandemic continuing to rage on throughout the world, this year’s WWDC is entirely virtual — including the company’s big annual keynote, where it shows off all of the updates coming to iOS, macOS, and all of the other software it builds in-house.

Didn’t have time to watch the whole stream live? Here’s a quick rundown of all the highlights, category-by-category. The next version of iOS will roll out in preview mode to developers today, with a public beta expected sometime in July.

App Library:  A new home screen page that will show up after you swipe past your final page of apps. It automatically categorizes and sorts all of your apps, highlighting those you use the most. 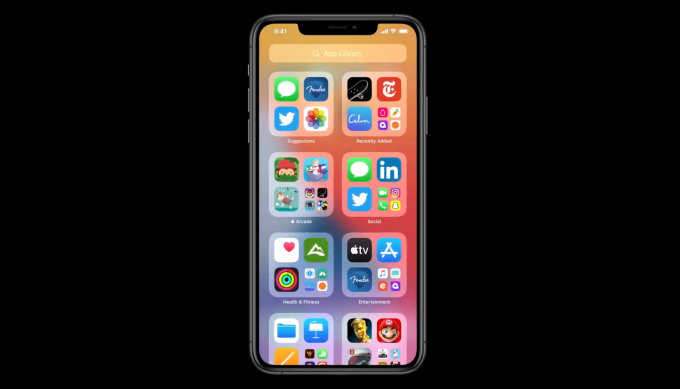 Widgets : Widgets can now live on the homescreen alongside your app icons, rather than being buried away on the Today screen

Picture-in-picture on iPhone : While the iPad has had picture-in-picture video playback since iOS 9, it’s been curiously absent on the iPhone. No longer! If you switch apps while playing a video (or having a video chat), it’ll continue playing in a small box you can drag around the screen.

Siri : The Siri interface has been overhauled to no longer take over the fullscreen, and can do speech-to-text transcription entirely on-device for the sake of speed and privacy.

Messages : You can now pin your most important conversations to the top of your messages list, and you can setup notifications on noisy group messages to only alert you when you’re mentioned by name. Oh, and Memojis can now wear masks.

Maps : Apple’s “new maps” are rolling out later this year in the UK, Ireland, and Canada. Maps will also soon be getting cycling directions (in NYC, SF Bay Area, LA, Beijing, and Shanghai at first) that are mindful of things like bike lanes and hills, along with directions for electric vehicle owners that factors in things like battery range and charging locations.

CarPlay : CarPlay is getting new wallpaper options, along with a handful of new built-in apps focusing on things like parking, charging, and food ordering. Meanwhile, Apple has been working with a handful of car makers (including BMW) to allow you to use your phone as a key.

App Clips: Tiny, fast, lightweight “Applets” that pop-up on demand without requiring you to manually install anything — like, say, something to take payment on the fly when you want to rent a scooter. Can be triggered by NFC, QR code, or via Safari/Messages.

While iPad OS will get most of the features above alongside iOS 14, it’s also getting a few new tricks of its own. Such as: 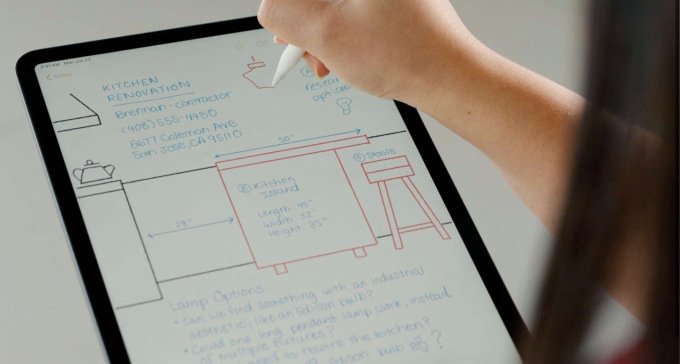 Apple Pencil/Scribble : Handwriting recognition now works in any text field, allowing you to jot a quick note without having to put the Pencil down to type. You can also now draw rough shapes (like stars, octagons, and arrows) and have them automatically convert to prettier computer-drawn shapes by briefly holding your pencil in place as you finish drawing.

Spatial Audio : Simulated surround sound, compatible with AirPods Pro only. They take things like the position of your head into account, using AirPod’s built-in accelerometers to make it seem like the audio is “fixed” to the real world around you.

Face Sharing : Got your Apple Watch setup in a way you love? You can share your current watch face setup with others through Messages, Mail, or Safari. If the person on the receiving end doesn’t have a required app/complication, they’ll be shown where to get it.

Multiple complications per app:  Each app on watchOS can now offer up multiple different watch face complications, instead of just one per app.

Sleep tracking : Watch can now automatically detect when you’re sleeping, recording this data and helping you track your sleep schedule over time. 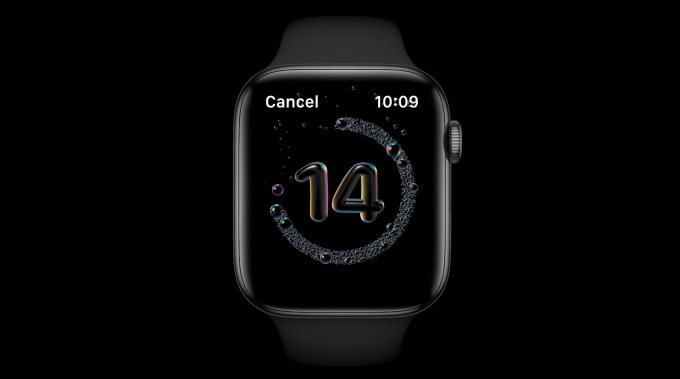 Handwashing detection : Relevant! The Apple Watch can detect when you’re washing your hands, using the accelerometer to look for the relevant motions and the microphone to listen for the sounds of scrubbing. When it detects you’re scrubbing away, it can automatically start a countdown timer to help ensure you’ve done the full twenty seconds. 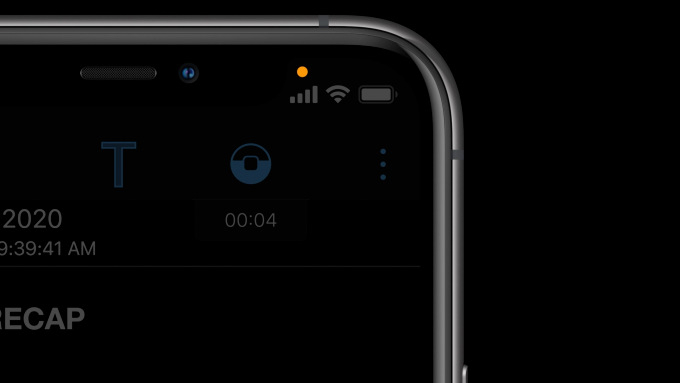 Mic/Camera indicator : While perhaps not as good as a dedicated hardware light, iOS will now show an on-screen indicator when an app is accessing your microphone or camera.

Simplified privacy polices : App developers will now have to provide a simplified “highlights” of what user data they track and/or share with third parties. These summaries will now show up prior to download in the iOS/macOS app stores. 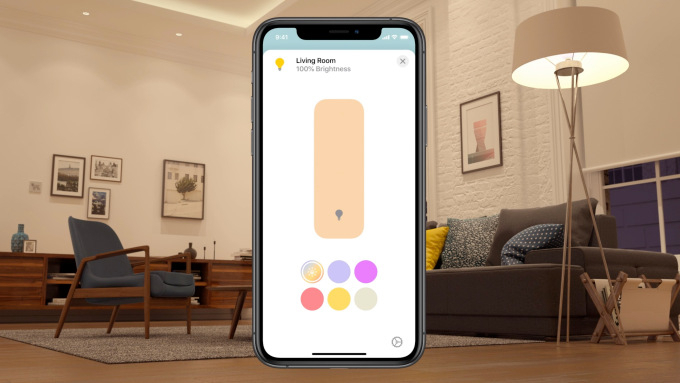 Adaptive lighting: Homekit can now automatically adjust the brightness/temperature of your connected smart bulbs throughout the day, allowing for things like cooler lights during work hours and warmer temperatures when it’s time to wind down.

Activity Zones : If you’ve got a security camera setup through HomeKit, you can now limit alerts to just specific sections of the video stream — motion alerts only when something enters your yard, for example, and not every time a car drives by on the street just barely in frame. 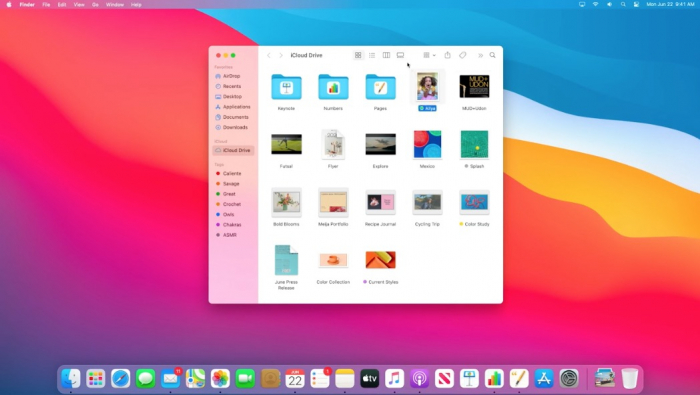 The next build of macOS will be called “Big Sur”, and will include some tweaks that’ll make it look and feel a bit more like iOS (like rounded square icons across the built-in App suite.)

Control center : Borrowing an idea from iOS, macOS will now have a dropdown in the upper right area of the screen that provides one-click access to display brightness, volume, dark mode, WiFi controls and more.

New maps : Maps on macOS has been redesigned with support for things like in-door maps, guides, favorite locations, etc.

Safari : Safari can now monitor your saved passwords to look for those that might’ve been exposed in breaches. A “Privacy Report” button, meanwhile, breaks down what’s known about what data is being tracked by the site you’re currently on.

Overhauled extensions:  Safari’s long antiquated extensions system is getting a refresh, with a focus on conveying/limiting what data extension developers can access. If an extension requests the ability to do something like access browsing history, it can be granted for a limited period of time, only on a specific site, or across all sites. 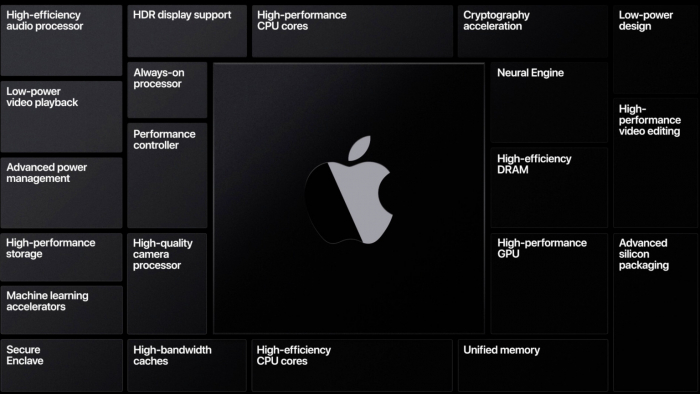 As rumored for months, Apple is switching from Intel to custom ARM-based CPUs it’s designing in-house, as it’s done for years across its iPhone/iPad/Watch lineups. The company says that this will bring a “whole new level of performance” while consuming less power, and allow for things like Apple’s Secure Enclave to come to the Mac. And iOS apps will be able to run on the Mac!

While developers will need to update their applications to run natively on the new chipsets, Apple says most developers should be able to get things “running in just a matter of days”; meanwhile, “Rosetta 2” in Big Sur will automatically/transparently translate existing apps for compatibility.