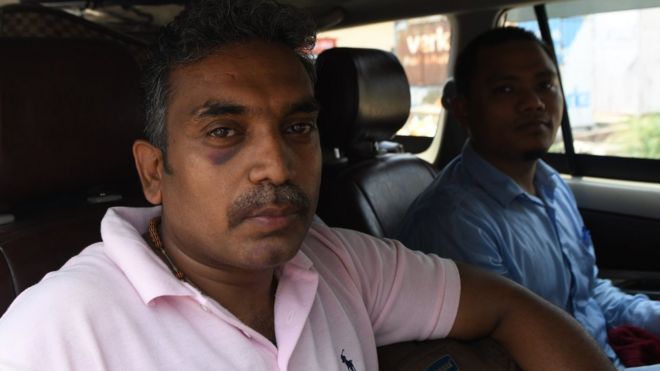 India is expelling half the staff at Pakistan's high commission (embassy) in its capital Delhi, accusing diplomats of spying and dealing with terrorists.

India will also reduce staff by the same number at its high commission in the Pakistani capital Islamabad, the external affairs ministry said.

There was no immediate response from the Pakistani authorities.

They were accused of trying to obtain information about Indian troop movements.

Indian media suggest the latest move was prompted by the alleged mistreatment of two Indian staff members in Islamabad.

Pakistan holds Indian employees over 'hit-and-run'
Pakistan 'broke international law' in spy case
Last week, the Indian government accused Pakistan of abducting the two men but Pakistan said they had been detained by police after hitting a pedestrian while driving.

What are the details of India's move?

According to the Hindustan Times newspaper, each of the two countries has an agreed strength of 110 staff at their respective high commissions, although the current number is actually about 90.

India's decision means the two commissions will both have to send back 35 staff members within a week.

"They [the Pakistani staff] have been engaged in acts of espionage and maintained dealings with terrorist organisations," India's external affairs ministry said in a statement.

He was also told, the Hindustan Times reports, that Pakistan had "engaged in a sustained campaign to intimidate the officials of the Indian High Commission in Islamabad from carrying on their legitimate diplomatic functions".

What are the allegations about the Indian staffers?

The Indian government's position, according to the Hindustan Times, is that Pakistani security agencies picked up the two men in Islamabad, tortured them and framed them over a road accident and fake currency.

When the two men, Dwimu Brahms and Selvadhas Paul, returned to India on Monday, they are said to have provided "graphic details of the barbaric treatment that they experienced at the hands of Pakistani agencies".

Pakistan police say the two men were detained after running a man over and trying to flee the scene but were later released from custody because of their diplomatic status.

There was no immediate comment on the allegations that the two men had been tortured.