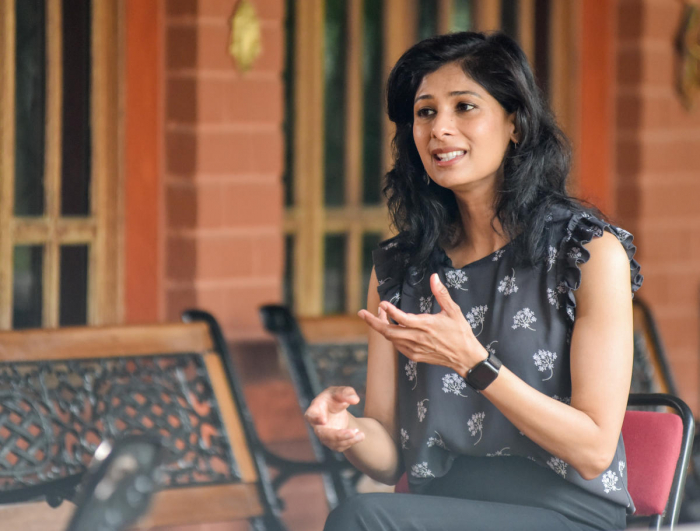 The International Monetary Fund has said the global economy will take a $12tn (£9.6tn) hit from the Covid-19 pandemic after slashing its already gloomy growth projections for the UK and other developed countries in 2020.

The IMF said it would take two years for world output to return to levels at the end of 2019 and warned that governments should be cautious about removing financial support to their fragile economies.

In an update to forecasts published in April, the Washington-based IMF said it now expected the global economy to contract by 4.9% this year, compared with a 3% drop expected in the spring. 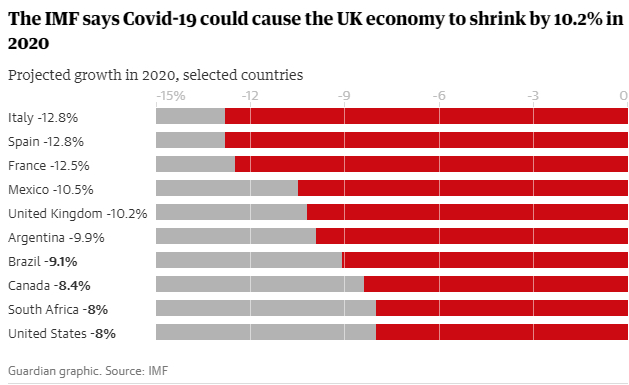 The IMF said the coronavirus pandemic had been more negative for activity in the first half of 2020 than expected, and recovery was also projected to be slower. Global growth is forecast to be 5.4% in 2021, down from 5.8% in April, but would plummet to zero in the event of a second wave of the pandemic early next year.

“The Covid-19 pandemic pushed economies into a Great Lockdown, which helped contain the virus and save lives but also triggered the worst recession since the Great Depression,” said the IMF’s economic counsellor, Gita Gopinath. She noted that the fall in output in 2020 would be half as bad as the 10% drop in the early 1930s, and said there would be a fall in living standards for 95% of countries this year.

The revised World Economic Outlook said the lockdown had dealt a “catastrophic hit” to the global labour market, adding that rising share prices were out of kilter with the deepest recession of the postwar era.

Every one of the G7 industrial nations and the leading developing nations has had its growth projection revised down, in what the IMF described as a “crisis like no other”.

The near-5% drop in global output this year would be much deeper than the drop of 0.1% recorded in 2009, after the near meltdown of the global banking system the previous autumn. The IMF had already envisaged 2020 as the worst year for global growth since the Great Depression of the 1930s.

The UK economy was on course to shrink by 10.2% in 2020, the fund said. In April, using data collected before the severity of Britain’s lockdown was known, the IMF had thought the UK would contract by 6.5% this year. France and Italy are also expected to register double-digit falls in activity of 12.5% and 12.8% respectively.

It said the forecasts were subject to an even greater than usual amount of uncertainty and were based on some key assumptions about the fallout from the pandemic: physical distancing persisting into the second half of 2020, long-term scarring from the larger than anticipated damage caused by the lockdown and a hit to productivity as surviving businesses ramped up workplace safety and hygiene practices.

The IMF said it was also assuming that financial conditions, which have eased since the spring, remained broadly at current levels. “Alternative outcomes to those in the baseline are clearly possible, and not just because of how the pandemic is evolving.

“The extent of the recent rebound in financial market sentiment appears disconnected from shifts in underlying economic prospects, raising the possibility that financial conditions may tighten more than assumed in the baseline.”

The IMF advised all countries – including those that had seemingly passed infection peaks – to ensure their healthcare systems were adequately resourced and called on developed countries to ensure that poorer nations had access to adequate, affordable doses of vaccines when they became available.

“Where lockdowns are required, economic policy should continue to cushion household income losses with sizeable, well-targeted measures as well as provide support to firms suffering the consequences of mandated restrictions on activity. Where economies are reopening, targeted support should be gradually unwound as the recovery gets under way and policies should provide stimulus to lift demand and ease and incentivise the reallocation of resources away from sectors likely to emerge persistently smaller after the pandemic.”