How lockdown is being lifted across Europe 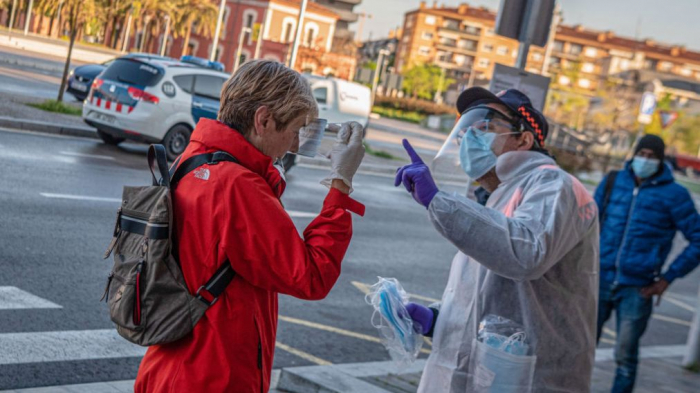 Across Europe, lockdown measures are being lifted cautiously, in phases, BBC reported.

Businesses are reopening and many children are back in school. Many of Europe's internal borders opened again in mid-June and there are hopes that external borders will be lifted from 1 July - although different nations are lifting border controls at different rates.

Here is how Europeans are emerging from life under lockdown.

Germany began reopening smaller shops in April: in early May control of lifting the lockdown was handed to the 16 federal states.

However, Chancellor Angela Merkel stressed that an ''emergency brake'' would be applied anywhere with a surge in new infections. A surge in cases linked to a meat processing plant near the town of Gütersloh caused regional authorities to reimpose local lockdowns for a week on 23 June.

Italy imposed a strict and lengthy lockdown on 7 March - initially in the north, then nationwide - with a ban on walking or exercising more than 200m (656ft) from home.

In early May, some restrictions were relaxed and people are now able to travel for longer distances, as well as visit their relatives in small numbers. On 3 June, Italy unilaterally reopened its borders and ended regional travel restrictions, and the country entered phase three of its lockdown lifting on 15 June. Cruises on Italian ships remain suspended.

France's strict lockdown was imposed on 17 March, with residents required to provide a travel permit justifying any outdoor trips.

Restrictions began to ease on 11 May, and on 14 June President Emmanuel Macron declared France had won its "first victory" against the virus as he lifted more measures

Denmark, one of the first European countries to announce a lockdown, started to ease restrictions in mid-April, with a four-phase plan.

The three Baltic states - Lithuania, Latvia and Estonia - became the first countries in Europe to allow free movement again, but initially only with each other.

From 15 May, citizens and residents could move freely across the three countries, provided they had not travelled outside the Baltic states in the past two weeks, were not infected, and not in contact with an infected person.

Those coming from elsewhere still have to self-isolate for 14 days. Estonia then said several countries would not be affected by quarantine from 1 June, including Germany, France and Austria, and the Baltic trio resumed free movement with Poland from mid-June.

Restrictions are slowly being lifted in a country that has seen a high number of deaths in care homes. The country unilaterally reopened its borders to all EU and Schengen zone countries on 15 June, as well as to the UK

No public sporting or cultural events can take place before 30 June.

Netherlands: Hairdressers and nail bars back in business

The Netherlands imposed a far less strict lockdown than next-door Belgium. Prime Minister Mark Rutte unveiled a five-phase plan for easing lockdown restrictions, which kicked in from 11 May.

A drop in cases meant the country announced plans to ease measures would be brought forward.

Austria was one of the first countries to ease its lockdown. The health minister said the reopening of small shops in mid-April didn't cause a spike in cases. Borders have now been re-opened with all its neighbours.

Spain outlined a four-stage plan on 4 May to start easing one of the strictest lockdowns in Europe, which saw children under 14 confined to their homes for six weeks.

On 1 June, Spain moved to a second phase for 70% of Spaniards, but Madrid, Barcelona and some other regions stayed under tighter phase-one restrictions.

The state of emergency officially ended on 21 June, restoring freedom of movement and reopening some borders. People must still stay 1.5 metres apart in public and wear masks on public transport and when shopping.

However, parts of northeastern Spain returned to phase two of lockdown easing in June after an outbreak of the virus among fruit pickers.

Ireland has had a stricter lockdown than the UK, with residents only allowed to exercise within 2km (1.2 miles) of their homes. But a five-stage roadmap - later cut to four - to reopen the country started on 18 May.

Switzerland began easing its eight-week lockdown in stages from 27 April.

Portugal has had fewer coronavirus cases and deaths than some other south European nations.

The government announced a three-phase plan, reopening different sectors of the economy every 15 days.

However, on 22 June authorities had to reimpose restrictions in 15 neighbourhoods around Lisbon after local outbreaks. These included the return of an evening curfew and limiting gatherings to 10 people.

Greece recorded its first Covid-19 case on 26 February and the government acted swiftly to impose a lockdown. On 28 April, Prime Minister Kyriakos Mitsotakis announced a relaxation of lockdown measures in the weeks ahead, with a particular focus on opening up the country for the summer.


Russia: Starting to go back to work

President Vladimir Putin announced that Russia's nationwide lockdown was being eased from 12 May, and that businesses could go back to work to stop unemployment rising further. He also said it was up to individual regions to decide the best policy. But Russia's daily infection rate remains high, compared with the rest of Europe.

In Poland, Covid-19 numbers are lower than in many Western European countries. Most of the recent infections have been amongst the country's coal miners in the southern Silesia region. Poland began lifting restrictions on 20 April, when parks and forests were allowed to reopen.

There was no compulsory lockdown in Sweden, unlike the measures seen elsewhere in Europe. But in line with government advice, most people took to voluntary social distancing and working from home.