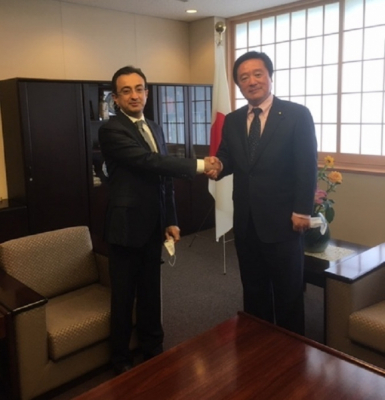 Azerbaijan’s Ambassador to Japan Gursel Ismayilzade has met with State Minister for Foreign Affairs and Member of the House of Representatives of Japan Kenji Wakamiya to discuss prospects for cooperation between the two countries, AzVision.az reports citing AzerTag.

Ambassador Ismayilzade highlighted the current economic situation in Azerbaijan. The ambassador noted that Azerbaijan attached great importance to the development of the non-oil sector, including agriculture, tourism, transport, and high technologies. The diplomat also spoke about the Azerbaijani government`s successful steps to curb the spread of the coronavirus pandemic and maintain economic stability in the country. He emphasized that the people’s life and health had been the top priority for the President.

Kenji Wakamiya noted the negative impact on the coronavirus outbreak on Japan’s economy. He highlighted the support program provided by the Japanese government to its people and private businesses.

Touching upon the development of bilateral ties between Japan and Azerbaijan, Ismayilzade emphasized the significance of high-level reciprocal visits in this regard.

During the conversation, the ambassador also highlighted the Armenia-Azerbaijan Nagorno-Karabakh conflict.

Hailing the high level of cooperation between Azerbaijan and Japan in the field of energy, the Azerbaijani diplomat noted the participation of Japanese giants ITOCHU and INPEX in large-scale energy projects implemented in the country. Ismayilzade emphasized favorable conditions for expanding cooperation between the two countries in the non-energy sector, noting it would be beneficial for both countries.