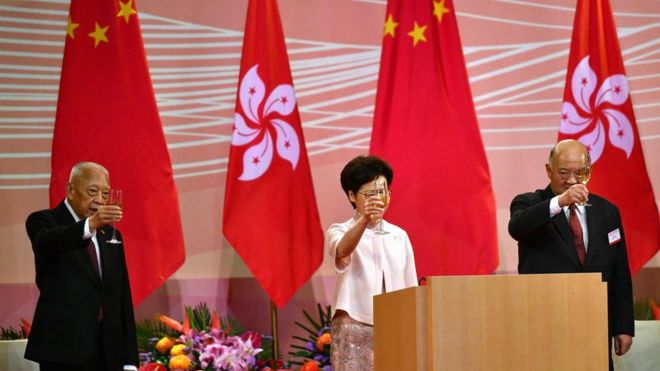 Hong Kong is marking 23 years since British rule ended as a new "anti-protest" law, imposed by Beijing, comes into effect.

The national security law targets secession, subversion and terrorism with punishments up to life in prison.

Hong Kong was handed back to China from Britain in 1997, under an agreement supposed to protect certain freedoms for at least 50 years.

But critics say the law is the "end of Hong Kong", and stops those freedoms.

"[China] promised 50 years of freedom to the Hong Kong people, and gave them only 23," US Secretary of State Mike Pompeo said.

The city's leader, however, said the law would "restore stability" after widespread protests in 2019.

"The [new law] is considered the most important development in relations between the central government and Hong Kong since the handover," said Chief Executive Carrie Lam.

At the same time, a Chinese official bristled at foreign critics, asking them: "What's this got to do with you?"

"We Chinese will not be scared by anyone," said Zhang Xiaming of the Hong Kong and Macao Affairs office of the State Council. "Gone are the days when we had to take cues from others."

Will there be mass protests on the anniversary?

A pro-democracy protest is held each year on the anniversary, typically attended by tens or hundreds of thousands of people.

But for the first time since the handover, authorities banned the march - citing a virus ban on gatherings of more than 50 people.

Some activists have pledged to defy the ban and march later in the afternoon.

"We march every year... and we will keep on marching," pro-democracy activist Leung Kwok-hung told Reuters.

Photos on social media - confirmed by police as genuine - showed a flag being used to warn protesters about the new law.