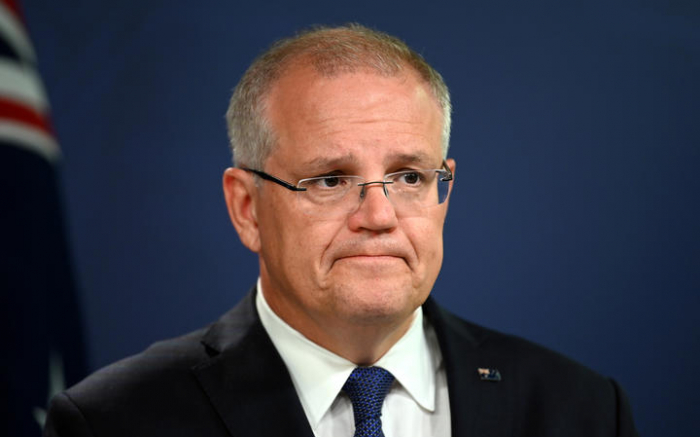 The Australian prime minister will use a speech on Wednesday to outline a more muscular defence posture, arguing the ADF needs “stronger deterrence capabilities” as the Indo-Pacific becomes “the focus of the dominant global contest of our age” amid tensions between China and the United States.

Morrison will reveal a pledge to spend $270bn on new and upgraded defence capabilities over the next decade – a substantial increase from the $195bn committed in the 10 years from 2016 when the last defence white paper was released, although it covers a later time period.

As part of this spending, the government is expected to commit on Wednesday to purchasing anti-ship cruise missiles from the US navy.

The system, known as the AGM-158C Long Range Anti-Ship Missile, has a range of more than 370km and will initially be used on F/A-18F Super Hornet aircraft, but may also be integrated onto other defence aircraft.

This purchase is expected to cost about $800m, with training on the weapon system set to begin next year, but the number of missiles has not been disclosed. It is an upgrade from Australia’s existing anti-ship missiles, introduced in the 1980s, which have a range of 124km.

The government is expected to also look at acquiring other missiles that could cover thousands of kilometres – but those specifics have not yet been locked in.

It is understood that in addition to new long-range anti-ship and land-strike weapons, Australia will also commit funds to the development, test and evaluation of high-speed long-range weapons, including hypersonic weapons.

These are a type of high-speed weapon more likely to withstand modern ballistic missile defence systems.

In a speech in Canberra on Wednesday morning, Morrison will argue the ADF needs stronger capabilities “that can hold potential adversaries’ forces and critical infrastructure at risk from a distance, thereby deterring an attack on Australia and helping to prevent war”. The move is intended to increase the “costs involved in threatening Australian interests”.

“Australia will invest in longer range strike weapons, cyber capabilities and area denial,” he will say, according to prepared remarks distributed to media in advance.

“We are expanding our plans to acquire long-range maritime and land strike capabilities, and to invest in more highly integrated sensors and weapons.”

He will also pledge to spend $7bn on space capabilities over the coming decade, including a network of satellites so Australia has an independent communications network.

The government is also expected to earmark $15bn over the next decade for information and cyber-related initiatives – such as bolstering Australia’s offensive and defensive cyber capabilities. This will also cover enhanced “electronic warfare” and boosting intelligence, surveillance and reconnaissance systems.

The new details come a day after Morrison committed to create 500 new jobs within the Australian Signals Directorate to tackle cyber threats.

The government has spent weeks laying the groundwork for the increased focus on cyber defences, including the 19 June press conference where Morrison said a wide range of Australian organisations were “currently being targeted by a sophisticated state-based cyber actor” – which the government did not name but was widely interpreted to be China.

The moves come at a time when diplomatic and trade tensions between Australia and its largest trading partner – China – are increasing.

Morrison will use the speech on Wednesday to say that as Australia stares down the Covid-19 pandemic at home, the country needs to “prepare for a post-Covid world that is poorer, more dangerous and more disorderly”.

Australia, he says, must “face the reality that we have moved into a new and less benign strategic era”.

Warning that the institutions and patterns of cooperation that have benefited Australia’s prosperity and security for decades are under increasing strain, Morrison will say the Indo-Pacific is “the epicentre of rising strategic competition”.

“Our region will not only shape our future – increasingly it is the focus of the dominant global contest of our age,” he says.

In a reference to China, Morrison will say: “Tensions over territorial claims are rising across the Indo-Pacific region – as we have seen recently on the disputed border between India and China, in the South China Sea, and in the East China Sea.

“The risk of miscalculation – and even conflict – is heightening.”

Morrison will say disinformation and foreign interference have been enabled by new and emerging technologies, terrorism remains a tenacious threat, and state sovereignty and rules and norms are under pressure.

Describing relations between China and the US as “fractious” as they compete for political, economic and technological supremacy, Morrison argues Australia, Japan, India, South Korea, southeast Asian countries and Pacific nations all have “choices to make and parts to play” in shaping the region.

Despite acknowledging “many pressures on the commonwealth budget”, Morrison will affirm the government’s commitment “to properly funding defence with the certainty of a new 10-year funding model that goes beyond our achievement of reaching 2% of GDP this year”.

The government will direct the ADF to prioritise its geographical focus on Australia’s immediate region – the area ranging from the north-east Indian Ocean, through maritime and mainland south-east Asia to Papua New Guinea and the south-west Pacific.

The government has also set three new strategic objectives for defence planning: to shape Australia’s strategic environment; to deter actions against Australia’s interests; and “to respond with credible military force, when required”.

Morrison will say Australia remains prepared to make military contributions outside of the immediate region where it was in Australia’s national interest to do so, including in support of US-led coalitions – but should remain primarily focused on the region.