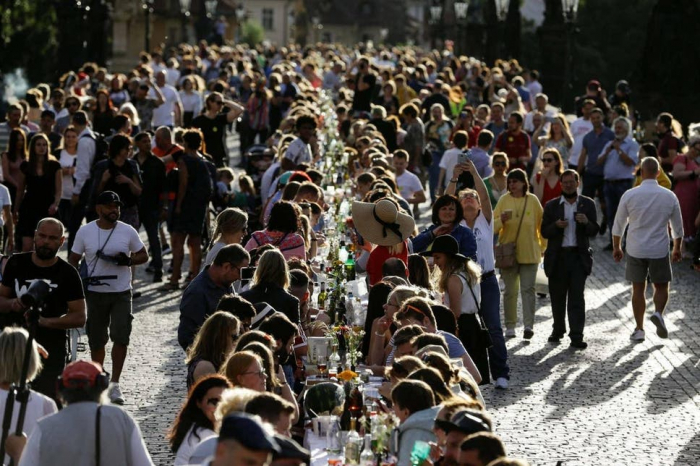 Prague has celebrated a self-proclaimed end to its coronavirus epidemic – by throwing a massive party attended by thousands of people all sharing food and without any social distancing.

The Czech capital held the unorthodox gathering to say a “symbolic farewell” to the infection and to show residents should no longer be scared to meet with friends or visit local businesses.

A 500 metre table was set up on the famous Charles Bridge with people packed along it swapping snacks and drinks brought from home.

Dancing and singing were enjoyed as local musicians played in the open streets.

The event was held despite some 260 new Covid-19 cases being found in the country last week. Fears that such an event could become a super-spreader if just a few undiagnosed sufferers turned up were apparently dismissed.

If the prudence of such a mass event may seem questionable to Brits currently living under the shadow of almost 50,000 deaths and a government still demonstrably failing to get a grip on the crisis here, it may be that Czechs have greater confidence in their own handling of the situation.

There have, so far, been fewer than 12,000 infections in the central European country and just 350 deaths after leaders enforced a lockdown that was implemented hard and early.

The new party came a month after restaurants, bars and pubs had been allowed to reopen and a week on since the government permitted public gatherings of up to 1,000 people again.

One attendee, Galina Khomchenko-Krejcikova, said she found out about the party on Facebook and decided to go along.

“I just finished a night shift so I didn’t have time to prepare anything,” she said. “But we brought some wine and snacks we found at home.”