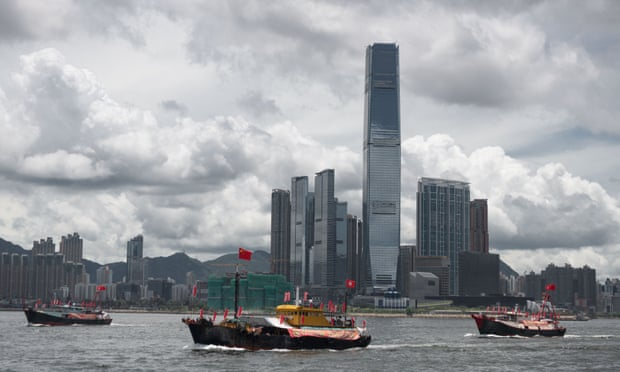 China has said the UK has no right to grant residency to Hongkongers fleeing a harsh new national security law, and vowed to take “corresponding measures” to stop such a move.

The comments, from the Chinese embassy in the UK, come after prime minister Boris Johnson pledged to honour a promise to offer nearly 3 million residents of the former British colony, those with British National (Overseas) status (BNO), the right to settle in the UK.

UK foreign secretary Dominic Raab has admitted there is little Britain can do to “coercively force” China if it tried to block Hongkongers from coming to the UK.

China’s ambassador to the UK, Liu Xiaoming, said on Thursday this would be a violation of agreements between the two countries, and called the UK’s criticism of the national security legislation “irresponsible and unwarranted”.

It is “clear … that all Chinese compatriots residing in Hong Kong are Chinese nationals, whether or not they are holders of the British Dependent Territories Citizens passport or the British National (Overseas) passport,” he said.

“If the British side makes unilateral changes to the relevant practice, it will breach its own position and pledges as well as international law.”

“We firmly oppose this and reserve the right to take corresponding measures,” he said in a statement posted on the embassy’s website on Thursday. “The UK has no sovereignty, jurisdiction or right of ‘supervision’ over Hong Kong”.

Almost 400 people have been arrested in Hong Kong as thousands protested against the law, enacted late on Tuesday following an opaque legislative process that took less than six weeks. Critics say the law gives authorities sweeping new powers to crack down on dissent and a new level of Chinese control over the semi-autonomous territory.

On Thursday, Australian prime minister Scott Morrison said his country was working on a scheme to provide a safe haven to Hong Kong residents after China’s “very concerning” decision. Morrison said Australia was “prepared to step up and provide support”, although his cabinet was yet to finalise the details, including whether the scheme would include a pathway to permanent settlement.

On Wednesday, Raab admitted there was little Britain could do to “coercively force” China if it tried to block take-up of the government’s visa pledge.

He told ITV’s Peston programme: “Ultimately if they follow through on something like that there would be little that we could do to coercively force them.”

“I wouldn’t want to be naive about this: I think we need to be realistic. But I do think that China as a rising, leading member of the international community is sensitive to the reputational risk in all of this but clearly not sufficiently that it hasn’t proceeded anyway ... There is diplomatic leverage, there are other ways that we can persuade China not to fully implement either the national security law or some of the reprisals you talk about.

“But ultimately we need to be honest that we wouldn’t be able to force China to allow BNOs to come to the UK.”

Johnson has said he will honour a promise to change immigration rules to allow holders of British Nationals (Overseas) passports, as well as those eligible for the passport, to reside in the UK and ultimately apply for citizenship.

The UK government believes the new security legislation passed by Beijing breaches the Sino-British joint declaration, which aimed to smooth the transition when the territory was handed back to China in 1997.

As of February, there were nearly 350,000 BNO passport holders, while the government estimated there are around 2.9 million BNOs living in Hong Kong.

Asked how many people the government anticipated would come to the UK from Hong Kong, Raab said: “It’s difficult to give a precise forecast but I think it is fair to assume that only a proportion of those that are offered the new status that we set out in the House of Commons today will take it up.”

Downing Street said those with BNO status will be eligible to travel to the UK immediately before the details of the scheme are finalised “in the coming weeks” and that they will not face salary thresholds.

The security law in Hong Kong criminalises a broad swathe of behaviours deemed as succession, subversion, terrorism and collusion with foreign forces. Hong Kong police made their first arrests on Wednesday under the new law, including a 15-year old girl waving a Hong Kong independence flag.

Liu was summoned to the Foreign Office on Wednesday, where the permanent secretary, Sir Simon McDonald, told him the imposition of the new legislation on Hong Kong breaches the Sino-British joint declaration.

Following his visit, Liu tweeted: “After turbulent months in the latter half of last year, the national security law will bring the order＆stability to Hong Kong and get its economy back on track.”

China views its actions as one of the last steps towards decolonisation, but an early test of its willingness to preserve the country’s freedoms will come in the autumn elections for the legislature.